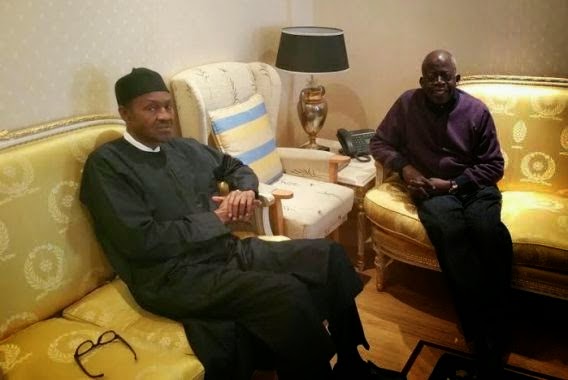 This Fayose will not leave APC people alone…lol. Another press statement below…

Ekiti State Governor, Mr Ayodele Fayose has said that the All Progressives Congress (APC) must apologise for lying to Nigerians on the health status of its presidential candidate, Major General Mohammadu Buhari (rtd), using pictures taken in Transcop Hilton, Abuja and claiming that the pictures were taken in London. Fayose said "it was interesting that the loquacious APC Spokesperson, Lai Mohammed could develop a cold feet and muscle pull in his mouth such that he suddenly realised that he could not join issues with Fayose."

In a statement issued by his Special Assistant on Public Communications and New Media, Lere Olayinka, Governor Fayose said; "The Chatham House one hour event scheduled for Thursday was paid for by the APC with the hope that Buhari will be well enough to appear in public briefly by Thursday.

"The Event Contact person, Chris Vandome confirmed via phone call that the event was 'Jointly
Sponsored' by the APC and Chatham House."

The governor said; "Having lied so brazenly that Buhari granted interview in London, using pictures taken in Transcop Hilton, Abuja, it is obvious that the APC is a party of deceitful people that should
not be taken seriously by Nigerians.

"If APC ssys that today is Tuesday, Nigerians should check calender to be sure."

He hailed Guardian newspaper for being honourable enough to publish an apology yesterday, on the false picture it used on Sunday, asking; "When is APC going to be humble enough to apologise to Nigerians?"

"Hopefully,  the APC expects to bombard Nigerians with pictures of Buhari's one hour appearance in Chatham House on Friday, using that to cover up the real reasons he travelled to the United Kingdom.

"If actually Buhari travelled out of Nigeria under a normal condition, could he have passed through the Abuja Airport without any of the Aviation Journalists interviewing him?

"So, those covering up Buhari's health issue should know that his paid appearance at Chatham House on Thursday will not do the PR they are expecting. Rather, it will raise further questions which they can only answer by saying the truth and apologising for the lies they told," the governor said.

Fuel scarcity: Petrol sells for N120 per litre in Osun

Osogbo â€“ A litre of Premium Motor Spirit (PMS) sold for N120 in Osogbo, the Osun capital, and its environs on Saturday, following the biting fuel scarcity in parts of the country. The last few days has seen the return of the long queues to the filling station. This development has led to PMS now selling for more than […]

NIGERIA : Hausa man arrested by police for allegedly having sexual intercourse with a goat

A 20-year-old man, Malam Kamisu Baranda has been arrested by Jigawa State Police Command for allegedly having sexual intercourse with a goat at Baranda forest in Dutse Local Government Area.

BAUCHIâ€” The member of Bauchi State House of Assembly representing Jema constituency under All Progressives Congress, APC,  Yusuf  Nuhu, that was kidnapped in Toro Local Government Area of the state has said that he was fed biscuits all the days he was in captivity. Nuhu stated this while speaking, yesterday, at Bauchi State Police command […]