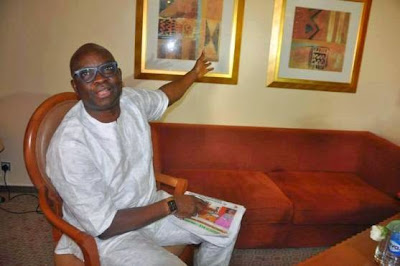 Governor Ayo Fayose of Ekiti state yesterday took some journalists to the Transcorp Hilton Hotel in Abuja to prove that the photo of APC Presidential candidate, Gen Buhari, having an interview with Kemi Fadojutimi on 'All Eyes on Africa' TV show was actually conducted in Abuja and not in London like his media aides claimed.

Fayose took the journalists round suite 881 at the Transcorp Hilton Hotel where he said the interview with Fadojutimi actually took place in. He compared the sofa, paintings, table lamp, the flower vase, the lighting points and DSTV magazine in the suite with what was published in the papers.

According to him, Nigerians deserve the truth from her leaders and he promised to tell Nigerians the truth. Gov Fayose said contrary to what the APC is saying, General Buhari is at the Cavendis Square in London

"Buhari is on the sick bed at Cavendis Square, London. They should come out and say so. I am not wishing him dead but we have a duty to always speak the truth. The APC have been trying to cover it up by not allowing him travel out but the man knows he is sick and so, he decided to go for medical check. But my argument is that General Buhari is old, even to govern a state. Governing this country needs energy and strength. We don’t want a president that will be inside the house and other people will hijack that government from him and start governing Nigeria as if it is their personal property.

They will need to educate the people to read between the lines. I am not against General Buhari, there must be a leader at a given time, but the fact remains that he is frail and not strong enough to run the affairs of this country.” he said

Asked whether he sent people to spy on Gen Buhari and his team in London, Governor Fayose said "They are entitled to whatever they say. I have said to you, they can’t find answers to a lot of things that I talked about. I come with facts, publish them in newspapers. At General Buhari’s age, I don’t need to run after him. We are playing politics, I need to present before Nigerians facts and figures. My prayer for Buhari is that he should live long in good health.

And I want to tell you that anybody claiming that I have sent anyone after General Buhari in London is only running his mouth because they can’t find answers to questions begging for answers when I present them to the public. They claimed that they don’t want soldiers for elections; when they win election soldiers are good, but when they lose even when their candidates have conceded, they say soldiers are bad. For them to be doing propaganda I said General Buhari cannot be president because he is being promoted by propaganda. If it’s by vote, General Buhari will not win. I’m telling you again, mark it. I’ve always told you when I left office that I will come back. I didn’t say it a month to election, I’ve been saying it a long time ago that I will come back as governor of Ekiti State. I’ve never said anything politically that failed, General Buhari will not win this election" he said

The Ijaw Youth Council (IYC) and the National Union of Petroleum and Natural Gas (NUPENG) have dismissed the claim by the Movement for the Emancipation of the Niger Delta (MEND) that its militia was responsible for the explosion that rocked some pipelines at the Port Harcourt Refinery in River State.   The IYC insisted that […]