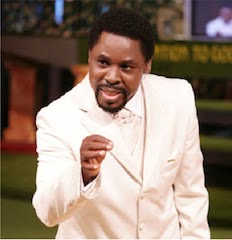 In the wake of the announced postponement of the February 14 general elections, T.B. Joshua has released a video online as evidence that he predicted the shift of the upcoming elections.The Synagogue Church of All Nations (SCOAN) founder had purportedly predicted the election postponement on February 9, 2014 among other prophesies.

The two minute twenty-five seconds clip uploaded on SCOAN's YouTube channel, Emmanuel TV shows prophet Joshua telling the congregation : “What I am seeing is heavy. I am seeing rain – the cloud is darker. The fulfillment of 2015 – pray for it.”

“Is that not the time of elections? Democracy is sweet – pray that your democracy would not be rubbished,” he continued.

Joshua added, “I am seeing disagreement at the end of the day and that disagreement can result to anything. Nigeria, these are the challenges you are going to face – challenges of disagreement… They will want to fight; we have to pray.”

The footage concluded with another segment of Joshua addressing his congregation, this time on November 9th 2014.

“Pray for your nation,” he said. “If you are able to cross this election, you cross it all. The election you are about to do will determine Nigeria.”

The seeming crack within the northern socio-cultural organisation, the Arewa Consultative Forum (ACF), came to the open  Thursday, when the chairman of the forum, Alhaji Aliko Mohammed, openly expressed disappointment with some of its members asking President Goodluck Jonathan to contest the 2015 election. Besides, Mohammed alleged that the presidency was employing the ‘divide and […]

The Nigerian National Petroleum Corporation (NNPC) yesterday rose in defence of  the beleaguered Minister of Petroleum Resources, Mrs. Diezani Alison-Madueke,  who the House of Representatives had  ordered its Committee on Public Accounts to probe for allegedly spending N10 billion on chartering jet over a two-year period. The minister was accused of flying with the chartered […]

In a statement released in Abuja yesterday, Femi Fani-Kayode said Chief Obasanjo has burnt all the bridges and that he has left the People’s Democratic Party (PDP) forever. The PDP Presidential campaign spokesperson said Obasanjo asking someone to tear his PDP membership card while he stood there and watched was painful and tragic. Read statement […]