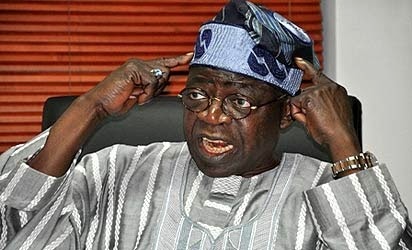 National leader of the All Progressives Congress, APC and former governor of Lagos State, Asiwaju Bola Ahmed Tinubu, has described the postponement of the 2015 general elections by the Independent National Electoral Commission, INEC, as democracy at gunpoint.

Tinubu, reacting to the decision by the INEC via his Twitter handle, @AsiwajuTinubu, said the INEC chairman, Professor Attahiru Jega caved in to pressure and blackmail.Tinubu noted that the shift in the dates for the general elections was a mere pretext by the Peoples Democratic Party, PDP to gain time to perfect its rigging machine.

The former Lagos State governor, who said there was nothing new in the security situation in the last one week that has not been there in the past three years to warrant the postponement, accusing security chiefs of playing the script of the PDP, adding that Nigerians are not ignorant of the plots/sub plots for postponement.

President Buhari returns from US

ABUJA–President Mohammadu Buhari is back to Nigeria after a 3 day official trip to the United States of America. He retuned at the early hours of Thursday via presidential wing of the Nnamdi Azikwe International Airport, Abuja. He was welcome by the Vice President, Prof. Yemi Osinbajo and the Service Chiefs. Presidential spokesman, Mr. Femi […]

Alhaji Abubakar Tsav is a respected Nigerian who left the police force as a commissioner of Police. In the dark days of Abacha when bombs were flying over Nigeria and killing democratic forces, Tsav  stood on the side of truth and ordered investigations into some killings. He was about to unmask some killers when he […]

Emir of Gusau dies at 91

The Emir of Gusau, Alhaji Muhammad Kabir Danbaba, is dead. 91-year-old Danbaba reportedly died today, March 5, at the Nigeria Turkish Nizamiye hospital in Abuja after a protracted illness. His death has been confirmed by the State Commissioner for Information, Ibrahim Magaji. The late Emir celebrated his 90th birthday and his 30 year on the […]