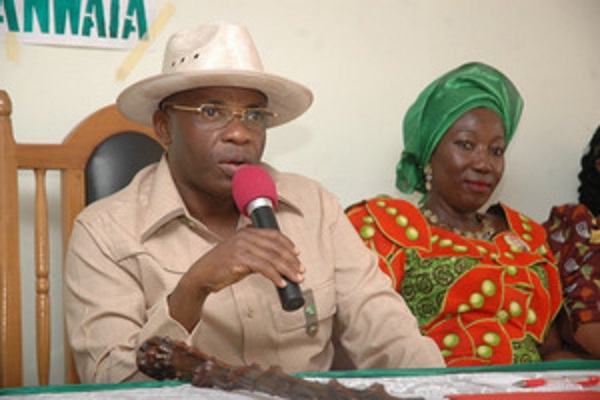 In what has characteristically become part of his life, former governor of Imo State, Chief Ikedi Ohakim has beaten his wife, Barr. Mrs Chioma Ohakim to coma, codewit.com can report.

codewit.com learnt from a reliable source that the incident which took place last weekend in Abuja, started over a minor domestic issue of selling the family properties in the nation’s capital.

The former governor had sold the property in the high brow area of Abuja to finance his re-election campaign without informing his wife.

According to the source, trouble started when the former first Lady queried her husband over his reason for selling one of their properties in Abuja without her consent.

This was said to have infuriated the ex-governor and in a fit of anger, he started beating her mercilessly.

The source, who pleaded anonymity, disclosed that to avoid the rein of punches from her husband, Chioma ran to her private room.

But, not satisfied with the beating he gave her yet, Ohakim was said to have pursued his wife to the private room, ripping the door open and continuing the beating.

When she slumped into a coma, he left her and walked away.

She was however revived by her children who discovered the incident later.

To cover the bruises he inflicted on his wife, the source hinted that he pleaded and persuaded his wife to seek treatment abroad.

The Imo former governor who felt heavy remorse over his action flew his wife out of the country for medical attention.

It would be recalled that just last week Wednesday, Ohakim in a rare display of rage flew off the handle and physically assaulted his confidant, Chief Vitalis Orikeze Ajumbe.

According to Ajumbe, who served as Ohakim’s agent at the December 8 PDP governorship primaries, the former governor owed him millions of naira accruing from the jobs he did for him, part of which included some millions he helped raise for him before the primaries.

“When i called on him to pay me, he finally invited me to his residence in Owerri after dodging me several times. He gave me a Fidelity Bank cheque which could not be cashed both in Abuja and Owerri”, he said.

Ajumbe added that he mailed the bounced cheque back to the former governor, who now invited him to his house in Owerri.

Because of the sensitive nature of the issue, Ajumbe said he went to see Ohakim in the company of two of his friends.

He stated that after about two hours delay, Ohakim emerged from his swimming pool and requested that the two friends of Ajumbe should go and leave him to thrash the matter out with him as friends”.

“I obliged his request and told my friends to go in front of the house to wait for me. It was then that Ohakim started shouting at me and was asking if I was using the dud cheque to blackmail him. I told him that I would do no such thing.

“But before I could finish what I was saying Ohakim grabbed an iron bar by the side of his house and started hitting me. He hit me first on the head with blood gushing out and later on my back when I fell down. He hit me severally with this iron bar and ordered that the gates be lucked for him to kill me the way he killed other people like me.

IF everything goes on as planned, soon the nation’s Power sector will be fully private sector controlled following the recent agreement between the Federal Government and Labour over payment of terminal benefits for workers in the sector. In this interview with Labour Vanguard, General Secretary of the National Union of Electricity Employees, NUEE, Comrade Joe […]

Ahead of its national convention, the  All Progressives Congress (APC) convention committee has endorsed a proposal zoning the chairmanship slot to aspirants from the South-south zone.   The report of the convention sub-committee on zoning has also narrowed down the zoning of the national secretary position to either the North-east or the North-west as at […]

President Muhammadu Buhari, on Tuesday, June 23, 2015, reportedly ignored a governor’s question on his delayed ministerial list. The shunned governor is said to have asked Buhari when the names of ministerial nominees would be sent to the Senate for screening, according to Punch. However, the President reportedly refused to answer the question posed by […]