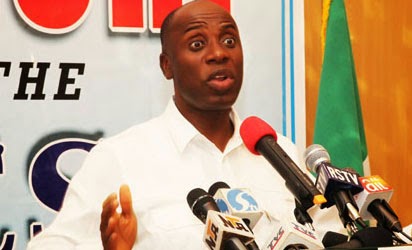 The Peoples Democratic Party, PDP has reacted to claims by Governor Rotimi Amaechi of Rivers state that Nigerian pastors were given a N6bn bribe to campaign against Muhammadu Buhari, Presidential candidate of the All Progressives Congress, APC.

According to PUNCH, PDP National Publicity Secretary, Olisa Metuh said, ''It is a crime to the Church and Christianity. It is an insult on Christianity. To say that pastors are paid to support the President is height of recklessness. Such allegation is despicable and should be condemned. There was nothing like that from us as a party and there was nothing like that from our candidate''.
Also, Rivers state Assistant Publicity Secretary of the PDP, Samuel Nwanosike, challenged Amaechi, to name the pastors that collected the N6bn.

The popular Yoruba comic actor, Alhaji Omidina Babatunde otherwise known as Baba Suwe who is being held at the custody of the National Drug Law Enforcement Agency (NDLEA) yesterday made his second excretion without any trace of drug found. Yesterday excretion has made it the second Baba Suwe has excreted since his arrest by the anti-narcotic agency. […]

I have breaking news from Rosenwald comma Maryland about fractured penises. The news is so important that, as a public health service, I do not want to stall its dissemination with a sophomoric joke that might cause a bout of sudden unemployment. So herewith is the title of an academic paper that hit my digital […]

Lagos – Thousands of youngsters aspiring to hone their football skills today thronged the Legacy Pitch of the National Stadium, Surulere, Lagos and the Liberty Stadium, Ibadan for the on-going season 3 of the Airtel Rising Stars national U-17 Tournament which is at its zonal championship stage. The youngsters, male and female, had come out […]