Skip to content
The University of Cambridge Local Examinations Syndicate, UCLES, now Cambridge Assessment, has provided further details on the West African School Certificate, WASC, results presented by Muhammadu Buhari, the candidate of the All Progressives Candidate in the February 14 presidential election. 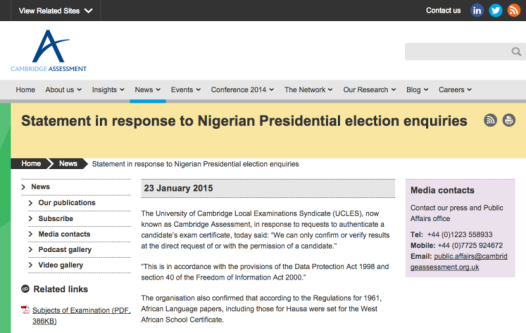 In a new post on its website, the university confirmed result grades for the examination in 1961 were issued in numbers, not letters, as suggested by critics of Mr. Buhari who have dismissed the results he presented as fabricated.
According to Cambridge, “Examination results were classed in grades from 1 to 9”.
“1, 2,3,4,5 & 6 indicate a Pass with Credit; 7 & 8 indicate a Pass; 9 indicate a Failure,” the school said.
Results tendered by Mr. Buhari shows he had credits in English Language, Geography, Health Science, Hausa Language; failed in Mathematics and Woodwork, and had a pass in Literature in English.
In its post, Cambridge said for candidates to qualify for its certificate in 1961, they needed to pass English, and not necessarily Mathematics. 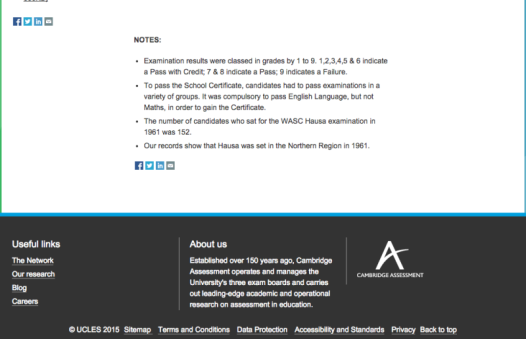 “To pass the School Certificate, candidates had to pass examinations in a variety of groups. It was compulsory to pass English Language, but not Maths, in order to gain the Certificate,” the university said.
The details followed intense controversy over whether Mr. Buhari, a former Head of State and retired Army General, completed his secondary education.
The Nigerian constitution requires any candidate running for the office of the President to have at least the Senior Secondary School Certificate or its equivalent.
The ruling Peoples Democratic Party, PDP, and the campaign office of President Goodluck Jonathan accuse Mr. Buhari of lacking the requisite qualification for the office of the president.
Mr. Buhari, who ran for president in 2003, 2007 and 2011, repeatedly declared that copies of his academic records were with the military. 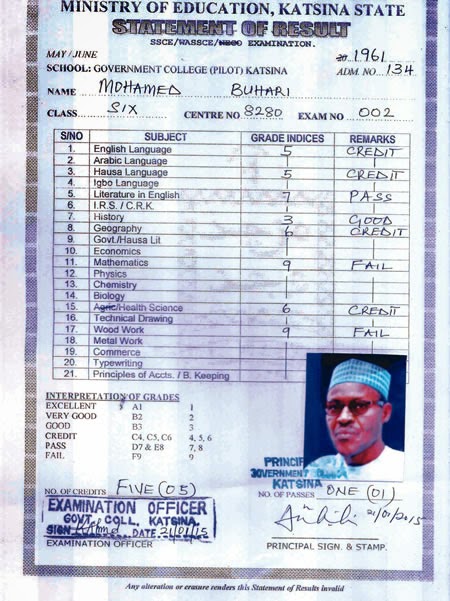 The former head of state also said original copies of his credentials were lost when his house was raided when he was in detention during the administration of Ibrahim Babangida who toppled his regime.
The Army at first said it had copies of Mr. Buhari’s results, but backtracked later, saying it had only a letter of recommendation from his principal at Katsina Provincial College, result grades without either the statement or certificate.
Responding, Mr. Buhari expressed surprise that the military could claim not to have his results, and insisted that he indeed completed high school and passed at Division Two level.
However after copies of Mr. Buhari’s WASC results as well as a master list containing the results of some of his classmates, obtained from his former secondary school, now Government College, Katsina was made available, some Nigerians, including President Jonathan and the PDP, dismissed the results as forged.
One of the allegations said Hausa language was not part of the Cambridge exams in 1961.
Another said Mr. Buhari’s results that year were recorded in alphabets, not in letters as Mr. Buhari claimed.
While Cambridge has declined to categorically confirm Mr. Buhari’s results, saying only the APC candidate could request or authorize such disclosure, the school posted a response to enquiries on the matter on their website authenticating some of the claims in Mr. Buhari’s result.
The University confirmed that according to the Regulations for 1961, African Language papers, including those for Hausa, were set for the West African School Certificate.
It also put the number of candidates who sat for the WASC Hausa examination in 1961 at 152.
“Our records show that Hausa was set in the Northern Region in 1961,” Cambridge said.
The university also confirmed result grades in 1961 were issued in numbers, not letters.

Jonathan expected in Delta for another ground breaking ceremony

As part of his commitment to human capital development, President Goodluck Jonathan is expected to return to Delta State on June 3 for a ground breaking ceremony of another university, the Eagle Heights University. The university, at Omadino in Warri South Local Government Area, will bring to six the number of universities in Delta State. […]

A chieftain of the Peoples Democratic Party (PDP) in Borno State, Dr. Pogu Bitrus, has indicated his interest to pilot the affairs of the party in the wake of the resignation of the former National Chairman of the party, Alhaji Bamanga Tukur. Bitrus, who holds a PhD, had on many occasions delivered his local government […]

One of the foremost traditional rulers in Bayelsa State (name withheld) is in the custody of the Joint (Military) Task Force (JTF) on the Niger Delta, Operation Pulo Shield, for allegedly sponsoring crude oil theft. The high-ranking traditional ruler was arrested along with three other persons for their alleged involvement in crude oil theft in […]