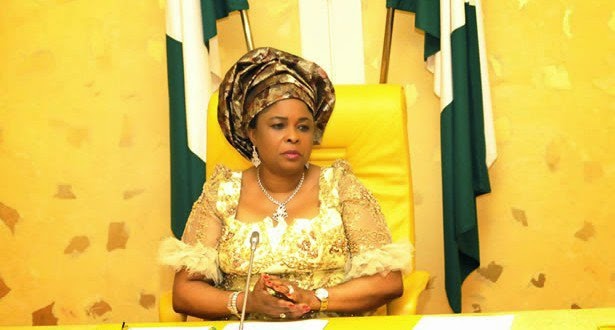 First Lady Patience Goodluck yesterday pleaded with the people of Anambra State to vote for her husband in next month’s presidential election because of his status as their in-law.Mrs. Jonathan, who was on President Goodluck Jonathan’s campaign team to the state, told PDP supporters at a rally in Onitsha that her spouse deserves their support if not for nothing else.

She described the PDP as a moving train and urged those still in doubt to come on board.The president himself said that his administration had released N10billion for the take off of the 2nd Niger Bridge, N1.5billion of which was paid as compensation to those whose properties were demolished to make way for the N130billion project.

The president who had earlier inspected the level of work on the bridge, which links Onitsha with Asaba, Delta State said: “I discovered that work is really in progress as the access road that will lead to the bridge that is about 3km has been graded just to make sure that there is access to the site.“I spoke with the management of Julius Berger and they assured me that the project will be completed within 40 months. ”He described the bridge as critical to his administration.

Also addressing the rally, the Southeast coordinator of the PDP presidential campaign and former governor of Anambra state, Peter Obi, told the people that most of the projects he executed during his tenure were sponsored by the President through the Millennium Development Goals (MDG).

National chairman of the party, Adamu Muazu, said PDP would remain grateful to the people of Anambra for their patience, commitment and dedication to the president.The leader of the party in the state, Chief Chris Uba, said the party was not leaving any stone unturned in making victorious certain for the PDP in the next month’s general elections in the state.However, a PDP leader in the state, Chief Okey Muo Aroh, told the president to warn Governor Willie Obiano over his threat to unleash security operatives on PDP members who are campaigning for election but whose names are not listed by the Independent National Electoral Commission (INEC) as contestants.

The president later paid a courtesy visit to the Obi of Onitsha, Alfred Nnaemeka Achebe at his Ime-Obi palace during which the traditional ruler urged him to reconcile Governor Obiano and his predecessor, Obi.The duo had fallen out soon after Obiano’s assumption of office and Obi’s defection from APGA to PDP.Speaking, Governor Obiano said the entire Anambra State irrespective of political affiliations had decided to support President Jonathan for a second term in office as the state under his administration has witnessed great re-birth and shall support the President.Igwe Achebe thanked President Jonathan for his vision and transformation agenda.

He said: “We want to remind you of what you said when you visited Ndi Igwe in 2011.You said that you are PDP and PDP is you.“You also said that you are APGA and APGA is you and we want to stand by that by making sure that there is a level playing field for all the parties in the coming elections especially as the people of the state bury their different political parties to support you.”

If it is true that President Goodluck Ebele Jonathan has set up a commitee to consider the possibility of granting amnesty to Boko Haram then I will have no choice but to agree with the Voice of Delta newspaper when they wrote just this morning that he has "bowed to terrorism". He has not only […]

The National Chairman of Nigeriaâ€™s indepen-dent National Electoral Commission, INEC, Professor Attahiru Jega, yesterday confirmed the arrest of two INEC Ad hoc staff for carrying out a house-to-house registration of voters in Kano State. Weekend Vanguard gathered that the arrest was carried out with the involvement of eagle-eyed operatives of the Department of State Service, […]

2015 Presidential Election: Campaigns start Nov 16 With the release of the 2015 general elections time-table by the Independent National Electoral Commission (INEC), indications emerged, yesterday, that the campaigns for the next presidential poll would kick off not later than November 16 this year in line with the provisions of the Electoral Act. The 2011 […]