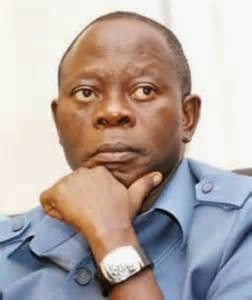 The Governor of Edo State, Comrade Adams Oshiomhole has withdrawn the accreditation of the correspondent and cameraman of the Independent Television (ITV) attached to the Government House in a reaction to a report that the governor’s security aides beat up a Catholic Priest.

The governor on Tuesday in a letter to the General Manager, Independent Television (ITV), Benin City, owned by Chief Gabriel Igbinedion, the Special Adviser to the Governor, Mr. Kassim Afegbua, said the report was considered unprofessional, ThisDay reports.

Mr Afegbua said recalled its earlier discussion with ITV on the series of fabricated and adversarial reportage of issues in the state which has continued to misinform, misrepresent and confuse the people of the state.

It was gathered that the state government had also terminated its Memorandum of Understanding (MoU) with Igbinedion University, Okada.

A sources close to the state government revealed that the termination of the MoU was as result of the refusal of the institution to honour the terms of the agreement which amounted to N350 million, it is speculated that it might not be unconnected with the disagreement.It would be recalled that ITV reported that the security aides attached to Governor Oshiomhole allegedly beat up Reverend Father Peter Udo, a Catholic priest.

A certain Uche Igwe had set out on a “regrettably long” journey from Port Harcourt to Aba and found himself trapped in traffic jam. According to him, the journey which would have lasted for less than an hour took him three hours. That personal experience, though doubtful, was considered enough reason by the frustrated traveler […]

Idi Ape-Akobo Ojurin-Olorunda road is known to me as a resident for the past ten years now. The road is known for the horrible traffic hold-ups due to spontaneous increase in the population of the residents with corresponding increase in the volume of motorists. The last time the road was rehabilitated; it didn’t last for […]

\The Association of Senior Civil Servants of Nigeria (ASCSN) has warned that it would not hesitate to shut down the economy; should there any case of corruption or fraud in the new pension scheme.   The threat is coming on the heels of the recent alarm raised by the National Pension Commission (PenCom) that about […]