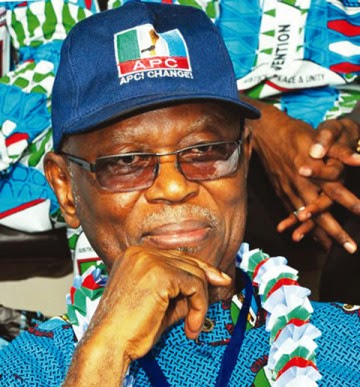 Unknown gunmen today Jan. 12th broke into the home of the Chairman of the APC, John Oyegun.

According to a statement by the party, two men suspected to be assassins broke into Mr Oyegun's Abuja home around 1.3am and went straight into his bedroom to ransack it. The men met Oyegun's wife as he was not at home when they came.

“The facts of the raid as available so far point to a sinister motive. For example, only Chief Oyegun’s room was ransacked in the whole house.

Common sense dictates that if the invaders were robbers, they would have ransacked the whole house in search of money and other valuables which they might have believed were in the residence.

The invaders, 2 burly men, removed the window burglar bars to gain access to the residence from the back, and then made straight for the bedroom of our national chairman. Police security was in place at the residence when the incident happened.” the statement read

The Sokoto State Chairman of the Unity Party of Nigeria (UPN), Alhaji Abubakar Abdullahi, on Monday called on Nigerians to resist any attempt by the Peoples Democratic Party (PDP) to remove the Chairman of the Independent National Electoral Commission (INEC), Prof. Attahiru Jega. Addressing journalists in Sokoto, Abdullahi alleged that the PDP was desperate to […]

Posted on May 7, 2013 Author Agency Reporter

The Police Special Fraud Unit, Ikoyi, Lagos State has arrested a couple, Mr. Adenuga and Mrs. Elizabeth Soyibo, for allegedly attempting to smuggle a set of twins out of Nigeria to the United States of America. The Soyibos were arrested by SFU, following a report from the American Consulate on April 15 2013 that the […]