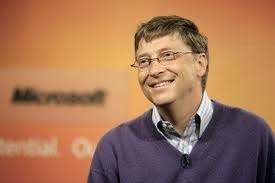 The Bill and Melinda Gates Foundation has announced it will be donating $50million (N8billion) to support the efforts of Nigeria and other West African countries hit by the Ebola Virus outbreak in containing the spread of the deadly virus. Announcing this in a statement issued today September 10th, the foundation said the money will be immediately released to the United Nations agencies and international organizations that are involved in the Ebola fight to enable them and national governments purchase needed supplies and scale up emergency operations.

Th foundation also announced the immediate release of an additional $2million to the various Centres for Disease Control and Prevention to support incident management, treatment, and health care system strengthening during this epidemic.
The foundation also pledged to work with private and public organizations to facilitate the speedy development of therapies, vaccines, and diagnostics that could be effective in treating patients and preventing further transmission of the disease.

The National Chairman of the Peoples Democratic Party (PDP), Alhaji Bamanga Tukur, has predicted that the  future of  Nigeria belongs to the youths, even  as he urged them to start early preparations towards taking over in all endeavours.   Tukur said  a younger member of the PDP would take over government after President Goodluck Jonathan […]

My group of Nigerian friends who sat together with melancholy glued to their countenances on that cold winter morning at the popular Nigerian Restaurant in Canning Town, East London, probably underestimated the depth of social decadence and violence sweeping through our nation.

Following the death of 31-year-old Christopher Onoriode Akpomowei Awin, the nephew of the First Lady, Mrs, Patience Jonathan, a petition has been sent to the Inspector General of Police (IG), urging him to order a thorough coroner’s inquest into the circumstances leading to Awin’s death on June 7, 2014. Awin who was said to have […]