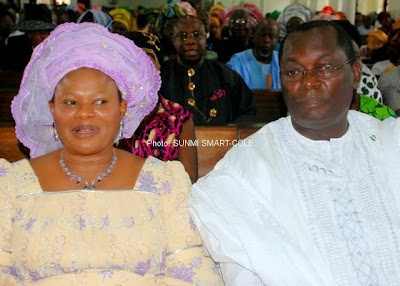 Former minister, Professor Dora Akunyili, willingly forfeited her American residency in favour of a Nigerian passport at a US immigration point, her husband has revealed.

Speaking at the requiem mass in her honour held at the Pro Cathedral Area 3, Garki, Abuja, on Tuesday, Dr. Nkem Akunyili narrated the incident to a stunned congregation. He said: “Dorothy is an elephant and if I start talking about her we will not leave.

We went to Florida, and there at the immigration, they told her, Look, you are an American citizen (because she won the visa lottery and that was what favoured us). And here you are, you have a Nigerian diplomatic passport, you must surrender one.

She used her left hand to drop her green card and retained her diplomatic passport. So you can see the level of her love for this country. “Once in her local government, they brought a trailer load of fertilisers, what did Dorothy do?

She shared all to the community.‎ They told her that this was not how it is done and she said, this is how it will be done.

Even as a professor if you see her in the home… she will hold water for me to wash my hand. And I will tell her, Mummy, you are a professor and she will say, I married Nkem before I became a professor.”

Akunyili also narrated the heart-breaking moment when his wife cancer was diagnosed. “One day‎, we went for medical check-up and we found a lump at her lower abdomen.

Doctors said she had seven months to live. “She told me, ‘You are not the husband I married, you are always dejected what happened?’

And I told her that the doctors said she had seven months to live. She said doctors have spoken, God has not spoken, seven months became two years and three months. “I want to thank our children, they were always there contributing what they could.

Even when she was in pain she still attended the national conference‎. You all heard what she said at the conference that ‘a country grows great when old men plant trees whose shade they will not live to enjoy’. “She told me she will serve this country with the last drop of her blood. Many did not want her to go because of her health, she said she will go to the conference.‎ She said Nigeria first and me second.”

They are saying they will come back in December, that the soldiers and police canâ€™t withstand themâ€™ Auchi, the headquarters of Etsako West Local Government Area of Edo State, was plunged into another round of confusion on Tuesday as the news of an impending robbery attack filtered into the town. The residents were panic-stricken as […]

U.S.-based United African Diasporan States (UADS) says it plans to create 10 million jobs in Nigeria within 10 years. The Executive President of the organisation, Prof. Brimmy Olaghere, announced this to the News Agency of Nigeria (NAN) in Abuja on Monday. UADS was established in 2001 by Africans based in the U.S. to partner with […]

THE  root cause of the Al-Majiri in Nigeria,  is due to the fact that the Nigerian Muslim intelligentsia, have failed to adopt the modernist scholars’ interpretation of Holy Koran Chapter 4 verse 3 and in preference chosen to hold on to the old orthodox school’s interpretation of the above-mentioned verse. There are two interpretations of […]