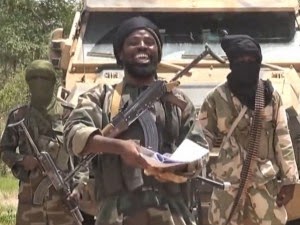 Heavily armed insurgents belonging to the Islamist sect, Boko Haram, Yesterday invaded a well-known Nigerian Police training college in Gwoza, Borno State. Our police sources said the militants, who numbered several hundred, stormed the police college with five armored tanks they had earlier seized from Nigerian soldiers who had had made several unsuccessful attempts to dislodge the sect from Gwoza over the last two weeks….

The sources told SaharaReporters that the college had five units of police officers in training at the time of today’s attack. One source disclosed that each unit had 59 trainees and a unit commander. Among the units in residence at the college were two mobile police (MOPOL) units from Nasarawa and Gombe States and a mobile police unit from Abuja. Two other units from Zamfara State were also at the college during the attack. One of our sources disclosed that numerous trainees were killed or seriously injured by the militants who carried out the assault. “Those who survived the attack had to run to the mountains nearby,” said the source. He added that some of the trainees managed to escape to Adamawa State. A police source told our correspondent that the surging militants blew up an armored tank stationed at the gate of the training camp before gaining entrance into the school and wreaking havoc. Boko Haram had seized much of Gwoza town two weeks ago. They hoisted the sect’s flag in the town and appointed an Emir to administer the strategic northeastern township, after the town’s traditional ruler escaped with other refugees.
The training center was one of the few government facilities that remained out of the control of the sect, until today’s massive offensive by the insurgents. Since the Islamist group’s take over of much of the town, the Nigerian army had launched a series of operations to liberate the town. But each of the military actions had been repelled by the militants in counter-attacks that proved deadly both for Nigerian troops and insurgents, according to a military source. Recent efforts by the military to mobilize troops in a determined battle to wrest Gwoza from Boko Haram have been hampered by protests by soldiers and their spouses.
SaharaReporters learned that many soldiers were refusing orders from their superiors go on missions against Boko Haram fighters. The defiant soldiers and their wives have expressed concern that the Islamist insurgents are equipped with weapons that are far superior to the weaponry and other equipment available to soldiers. “Some of the soldiers complain that their weapons do not march those of Boko Haram,” one source said.

FG: Why We Withdrew Charges against Mohammed Abacha

NIGERIA: Incessant hold-ups on our roads

So na here this hold-up start today?” commented a passenger by name, Sam, in the Lagos-bound commercial vehicle as the driver veered off the tarred portion of the road for the untarred portion just to beat the hold-up, whipping up dust clouds in the process and attracting curses from other road users. Continued Sam, “Yesterday, […]

Ahead of the general election in the country, the Chief Justice of Nigeria (CJN), Justice Mahmud Mohammed, has cautioned judges selected to serve as chairmen and members of election petitions tribunals not to compromise their integrity. The CJN vowed that never again would the nation’s judiciary serve as a tool to mortgage the country’s democracy […]