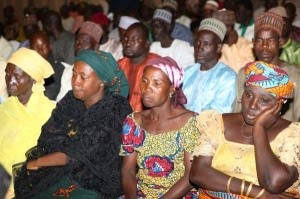 Some parents of the abducted Chibok schoolgirls have rejected insinuations that some of their daughters may have been the ones being used by Boko Haram to execute suicide bombings around the country.A parent, Mr Lucky Chibok, who spoke on behalf of other parents, told LEADERSHIP Sunday that their girls are

well behaved and cannot, under any influence, allow themselves to function as bombers for “wicked people” like the Boko Haram”.He said “These girls are children of God, and they did not opt to be taken by the Boko Haram terrorists or any group of extremists; they are schoolgirls, innocent and god-fearing”.“These girls have been brought up in the best homes of Christians and Muslims.

In Chibok, we don’t have rooms for zealots or extreme bigotry; and we believe our children cannot be used for, or turned into such bestial acts of Satan”.He, however, pointed out that if the girls eventually derailed in their decent upbringing, “then we would hold the government responsible for allowing t hem to stay this long without rescuing them, and all of us would blame the federal government for turning them into what we did not bring them up to be”.

NIGERIA: Channels, My Oga at the top and satellite runs

No doubt, Sunrise daily,Channels Television’s breakfast show was made even more popular by the My Oga at the topruckus. Many have had a good laugh about it, and quite a number have made a few bucks. However, doesn’t it occur to you that as a result, some ‘eminent’ personalities might think twice before appearing on […]

The Action Congress  of Nigeria (ACN)  has assured that it would be  impossible for any individual to attempt to hijack the new opposition coalition platform, All Progressives Congress under the present circumstance. Speaking at the public presentation of a book written by Mr. Salisu Lukman, on how to reposition the progressives in the country's politics, […]