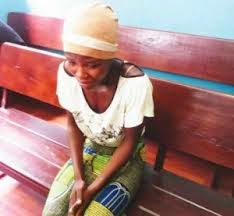 A woman identi-fied as Titilayo Kola was  yesterday strangulated to death allegedly by her husband a day after she was delivered of twins. Sources revealed that the incident took place at the couple’s apartment at No 23, Temidire Street, Ajowa area of Ado-Ekiti, the state capital. Findings further revealed that the deceased’s husband, one Mr. Kola, popularly known in as Melomelo (how many, how many), had escaped with the twins even as he was reported to have slept in the same room with his late wife, their new twins and other four children the night before the incident.
Narrating the incident to journalists, the landlady of the deceased, who simply identified herself as Mama Aluko, said, “Titilayo was delivered of a set of twins at midnight on August 7. I was with her to help with the children and other things. Her husband, who has not been living with her for some time now, also came around, while her mum too was also around.
“Around 8:30 in the evening, her mother told me she would be going for night vigil in her church. So, it was her husband, herself and their new twins that I left before I went to bed that night.
“This morning (August 9), I woke up planning whether to prepare Semovita or fufu for Titilayo. It was around that time somebody came to inform me that they couldn’t wake Titilayo up and that her husband and the twins had disappeared.”
Asked about other family members of the couple, the landlady said she didn’t know much about them, adding that Kola (the husband) came to rent the apartment about a year earlier, but, however, stopped living with his wife a few months after they moved into the apartment.
Confirming the development, the Ekiti State’s Police Public Relations Officer (PPRO), Mr. Victor Babayemi, said: “It is a case of homicide and child stealing. The deceased was found dead on the bed in quite a suspicious circumstance, and the prime suspect is the husband of the woman who we haven’t seen.
“So, we have a case of homicide and child stealing on our hands and we have commenced investigation.”

The ruling Peoples Democratic Party (PDP) has said the main opposition political party, the All Progressives Congress (APC), is haunted by its own shadow because it is a media creation and therefore has no political structure in the wards across the federation.   It also said it was as a result of this that the […]

Elechi: Support for My Election Not an Investment

Governor Martin Elechi of Ebonyi State weekend told the Peoples Democratic Party (PDP), faithful and his supporters in the 2011 governorship elections that their support  for is electoral victory was not an investment but a collective responsibility to ensure that there was a government, without which they would have been losers.   He said that […]

CAIRO (AFP) – A bomb exploded near a bus in Cairo Thursday injuring five people, a day after the government widened a crackdown on Islamists by declaring the Muslim Brotherhood a terrorist group. The windows of the red and black public transport bus were shattered in the explosion at a busy intersection in the north […]