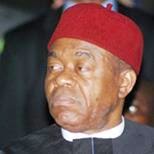 A group, Abia Solidarity Group for Democracy, ASGD, has described as “unacceptable” the zoning arrangement being allegedly mooted by the Governor of Abia State, Theodore Orji, for the election of his successor. The group said the arrangement could preclude those who possess the leadership qualities to turn the state around in the next dispensation. Mr. Orji, whose second term ends in May 2015, is reportedly rooting for his successor to come from the Abia South Senatorial District.

The governor is from Abia Central Senatorial District while his predecessor, Orji Uzor Kalu hails from the Northern Senatorial District. ASGD asked the governor to concentrate of providing democracy dividends for the people during the last lap of his administration instead of engaging in zoning of the governorship position. “It is necessary to press our incumbent governor to concentrate on delivering dividends of democracy, especially at this tail part of his administration rather than introducing measures that would deny citizens of the state the opportunity to choose a credible governor at the next dispensation through the introduction of his proposed zoning arrangement that will deliberately preclude some people,” the group said in a statement on Friday by its leader, Peter Elema. The group also canvassed the emergence of a female governor for the state, arguing that since the creation of the state in 1991, it had always been governed men. It specifically called for support for Nkechi Nwaogu, a serving senator who it said had the capacity to develop the state.

The group, however, regretted that the zoning arrangement being pursued by Mr. Orji could preclude the senator from achieving her ambition. It added, “As part of our avowed commitment to guide and consolidate democracy and ensure adequate development in our state, we wish to reiterate our firm resolves to ensure the enthronement of a responsible leadership in the state in the next dispensation. “We therefore advocate for a woman governor as a positive alternative to the persistent leadership failure by our men folk who seem to be busier fending for their families and cronies at the expense of the people of Abia state. “Considering the rate of infrastructural decay in our state since the last and present administration, we are convinced that the jinx can only be broken by the election of a woman governor for the state.” While encouraging other women to join the governorship race, the group however asked all Abia citizens, home and in Diaspora, to support Mrs. Nwaogu. It added, “A level playing ground should be ensured for this amazon who has demonstrated quality representation of the Abia Central Senatorial District at the 7th Senate of the Federal Republic of Nigeria as she competes with her male counterparts.
Abia indigenes vehemently disagree with this purported zoning arrangement. “Her courage and purposefulness in the race desires much encouragement from all and sundry, especially when her track record of achievements in the polity and other spheres of life is placed side by side with her male counterparts.”

Human Rights Writers Association of Nigeria (HURIWA), a pro-democracy non-governmental organisation, has criticised as ruthless and reckless the decision by the National Assembly to proceed on prolonged summer break at this precarious period of the highest manifestation of insecurity and anarchy across northern Nigeria. It therefore urged the hierarchy of the national legislature to call […]

Following the recent developments in trying to solve the problem of Fulani herdsmen invasion in Nigeria, the Federal government has carved out strategies to develop ranches in all parts of the federation to house the Fulani herdsmen settle with their cattle and reduce the nomadic movements around the country. The Northern governors’ Forum held Thursday […]

NPE 2015: Jonathan has edge over the North â€“ Sulaimon

In this interview, the Coordinator of the Northern Emancipation Network, Mal. Abdul-Azeez Sulaiman, says that the ordinary people in the North can no longer follow the political elite blindly.  He also warns that the North could suffer after Nigeria presidential Election (NPE) in 2015 if it continues to antagonize President Goodluck Jonathan as it is […]