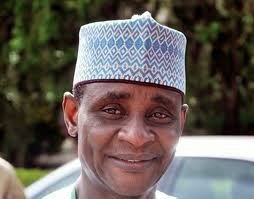 Mr. Maigari was sacked on allegations of “financial misappropriation, misapplication and maladministration”
The President of the Nigeria Football Federation, Aminu Maigari, has been impeached.
Mr. Maigari was removed from office after a vote of no confidence was passed on him by members of the executive committee of the NFF at a meeting Mr. Maigari called to review Nigeria’s performance at the just concluded FIFA World Cup.
Announcing the decision of the board to newsmen shortly after the meeting, Adamu Muazu, who represents the North-West on the executive board, said Mr. Maigari was removed for “Financial misappropriation and mal-administration”.

“Full details of the allegations against the former President will be made soon,” he said.

Part of the communiqué issued after the meeting read “After thorough and exhaustive deliberations on the uncalled-for secrecy surrounding all financial dealings of the Federation and failure to call meeting of the Executive Committee for the past eight (8) months, during which so many weighty decisions on Nigeria football had been taken by a small cabal within the Board, the Executive Committee passed a vote of no confidence on the NFF President, Alhaji Aminu Maigari”
The communiqué continued: “In view of the above, the Committee approved the immediate dismissal of Alhaji Aminu Maigari, from the NFF Executive Committee on grounds of financial misappropriation, misapplication and maladministration”.
Mr. Muazu also said a new election into the executive committee of the NFF will be held on the 26th of August, and expressed the gratitude of the NFF to President Goodluck Jonathan for continuously funding the game of football in Nigeria.
The First Vice President, Mike Umeh is to act as the President of the NFF until the election in August.
The meeting took place at the NFF Glass House Headquarters in Abuja.
In attendance at the meeting in Abuja were Aminu Maigari; Mike Umeh (Vice President); Emeka Inyama (Member); Dilichukwu Onyedinma (Member); Ahmad Kawu (Member); Effiong Johnson (Member); Christopher Green (Member); Shehu Adamu (Member); Muazu Suleyman (Member); Ayodeji Tinubu (Member); Yusuf Ahmed (Member); Felix Anyansi-Agwu (Member); Suleiman Yahaya-Kwande (Member); Secretary, Musa Amadu, was also in attendance.

Mr. Maigari, who was earlier sacked by a Plateau State High Court shortly after the World cup, only returned to office after FIFA suspended Nigeria and threatened total ban citing government interference.

The Archbishop of Canterbury, Rt. Rev. Justin Welby, yesterday condemned the recent bomb blasts in Jos, describing it as deeply disheartening.   He said he knew Jos very well, adding that he was at the Presidential Villa to pray with President Goodluck Jonathan, and also to “express our condolence for the losses.”   Welby spoke […]

***13 Million Cards to be issued first, in largest card rollout of its kind in Africa Cape Town, South Africa – May 8, 2013 – The Nigerian National Identity Management Commission (NIMC) and MasterCard today announced at the World Economic Forum on Africa the roll-out of 13 million MasterCard-branded National Identity Smart Cards with electronic […]

Honorable Musa Adamu Funtua is Katsina State Commissioner for Agriculture. Funtua, one of the longest serving commissioners in this democratic dispensation, served in the Ministry of Rural Social Development and Youths and Sports before being moved to Local Government and Chieftaincy Affairs as pioneer commissioner. He also served as a member of the Katsina House of Assembly. What have […]