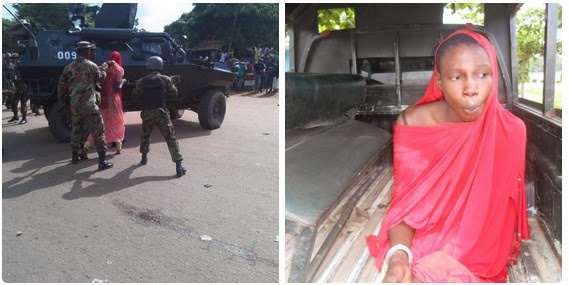 Nigerian Troops are holding a man suspected to be connected with the explosion targeted at General Muhammadu Buhari on Wednesday. The young man who was apprehended by military patrol team that swooped on the area immediately after the explosion, had disguised as a woman clad in female garb to exude femininity with a brazier affixed to his chest.
The suspect was arrested while trying to fizzle into a crowd of onlookers when the patrol team arrived the scene. Youths in the area attempted to mob him while he was being arrested but were restrained by troops who quickly whisked him away in an armoured personnel carrier.
He is currently being interrogated by security agencies in a bid to ascertain his links. 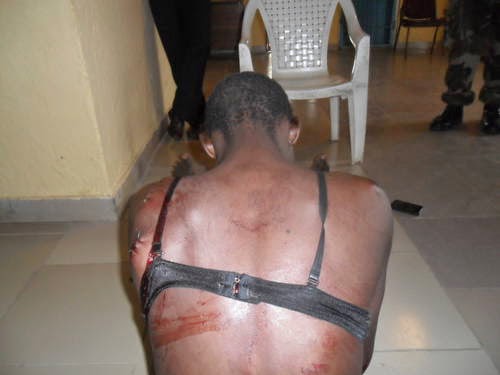 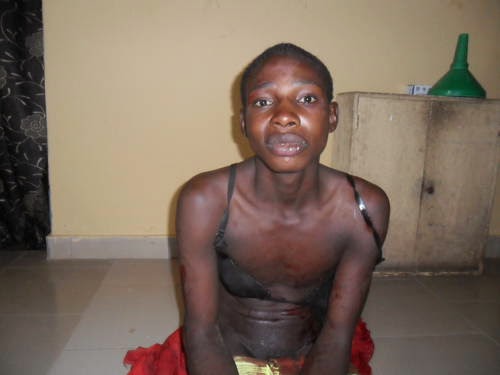 THE 81 years old Mrs. Adetutu Grace Famuagun, mother of the late Deputy Governor of Ekiti State, Mrs Funmi Olayinka, yesterday, wept uncontrollably and repeatedly asked Governor Kayode Fayemi of Ekiti State, the whereabout of her daughter. Fayemi, who was at the Famuwagun’s family house, Oke Ori-Omi, where the parents of Mrs. Olayinka live in […]

President Buhari hosted members of the Diplomatic corps in Nigeria, to a cocktail party, at his official residence on Thursday, February 18, 2016. The visibly elated President said “I am very delighted to have you at this reception organized principally, to provide a relaxed atmosphere for an informal interaction at the early stage of the […]

Two decomposing human heads were found in a hotel ( upper class hotel ) at Onitsha along Old market road by the Anambra State Police Command on Thursday. Following a tip off the police were said to have invaded and searched every rooms in the hotel and in the course of the search found the […]