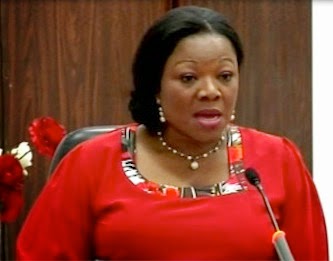 Marilyn Ogar, spokesperson of the Department of State Services (DSS), has denied a report that Dr Obiageli Ezekwesili, a coordinator of #BringBackOurGirls campaign, was arrested at Nnamdi Azikiwe International Airport, Abuja on Monday Ogar, however, accused Ezekwesili of creating a scene with a view to attracting unnecessary attention at the airport during the process of screening passengers about to board their flight.

“We do not have any such person (as Ezekwesili) in detention facility right now, you know that statutorily, the DSS clears all passengers going out and coming into this country.
“Let people stop trying to arrogate to themselves unnecessary importance when we have serious security challenges in our hands.
“Security issues must not be trivialised for any reason, please,” she said.

Ezekwesili accused the DSS of detaining her and withholding her international passport as she tried to travel to the United Kingdom for an interview with BBC Hardtalk. Ezekwesili wrote on her Twitter page that: “On my way to London this morning for my @BBCHARDtalk appearance billed for TOMORROW and the SSS has DETAINED me by WITHHOLDING my PASSPORT.” She then tweeted that: “No one can seize my democratic rights. I refused to let the SSS get away with trampling on my constitutional rights.”

Minutes after she was given her passport by the DSS she wrote: “SSS has released it. Just barely made the BA flight. Last to board @ 7.55 for an 8.00 am flight that is now taxiing. Is this a DEMOCRACY?”

Former President, Olusegun Obasanjo has again criticized incumbent, Goodluck Jonathan saying that he has mismanaged Nigeria. Obasanjo made the remark on Sunday, May 24, 2015, during a meeting with delegation of South-West women leaders who paid him a courtesy visit in his Abeokuta, Ogun State home. “The country had been poorly managed in the last […]

ADO EKITIâ€”A governorship aspirant on the platform of the Peoples Democratic Party, PDP, in Ekiti State, Prince Adedayo Adeyeye, has raised the alarm that the leadership of the  ruling All Progressives Congress have finalised arrangements to bring in people from the neighboring states of Ondo, Osun Kwara ,Ogun and Lagos for the ongoing continuous registration […]

ABEOKUTA-Former  Presidential candidate of the defunct Nigeria Advance Party (NAP)  Dr. Tunji Braithwaite on Tuesday, faulted the planned centenary anniversary of Nigeria’s amalgamation by the presidency in 2014, describing it as a celebration of slavery and bad history. The Human Rights Activist and lawyer who wondered why despite the myriad of problems confronting the country, coupled with the […]