Certainly, Peter Okoye, the other half of pop duo, PSquare, paid his elder brother, Jude Okoye, back in his own coin by missing Jude’s wedding which took place in Anambra on Thursday.
Jude ‘engees’ Okoye missed Peter’s traditional wedding to Lola Omotayo in 2013 and then posted a picture of himself in a Lagos studio.

In turn, Peter, Thursday, posted pictures of himself with a friend in front of a hotel and later with another group of friends inside their Omole, Lagos- SquareVilla- home on Instagram.

After some of his followers criticised him for being childish and saying he should have attended the wedding, he immediately went on a series of tweet explanation, saying the only family he knows is the one he built.

“Pple talking shit about blood” which blood is thicker than the 1 of my children? #mufus. asked fans “Does ur mum and dad care more about der own siblings more than they care for u? #mufus” he wrote via his @PeterPsquare handle.

Peter also blocked some of his followers who criticized him.

“#mufus talking about family! My number 1 family for now is the 1 I built. And nobody can change dat. #amout”, he said.

See his tweets  below 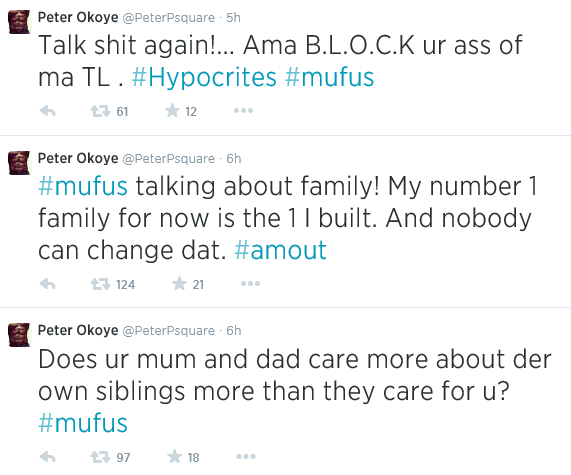 Former CPC spokesman, Rotimi Fashakin, has said that challenges the newly registered All Progressive’s Congress (APC) is likely to face are ‘infinitesimal’ compared to the hurdles it has had to surmount in its quest to become a registered political group in Nigeria.   Speaking on Channels Television’s Sunrise Daily, he said that what the party […]

Three Nigerians who tried to trick their way to a new life in the UK through sham marriage and illegal employment have been jailed. Henrietta Samugana, 32, Oluwatobi Adegbenro, 36, and his brother Olaseni Adegbenro, 30, were sentenced to 12 months, eight months and 12 months respectively when they appeared in court yesterday. All three […]

NIGERIA: Tukur, NLC, TUC Back Emergency Rule as Others Kick

Posted on May 17, 2013 Author Our Correspondents

Peoples Democratic Party National Chairman, Alhaji Bamanga Tukur,the Nigeria Labour Congress (NLC) and the Trade Union Congress (TUC) Wednesday expressed support for the proclamation of a state of emergency in Adamawa, Yobe and Borno States. However, other groups and individuals expressed reservations about the President Goodluck Jonathan’s  decision to escalate  the military solution to confronting […]