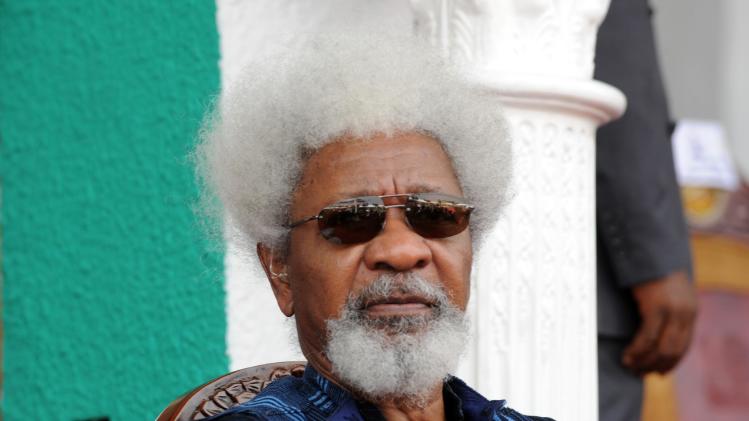 Jonathan applauded Soyinka's "life-long dedication and indefatigable commitment to using his acclaimed genius and talents, not only in the service of the arts, but also for the promotion of democracy, good governance and respect for human rights in Nigeria, Africa and beyond."

Dozens of literary and artistic events have been staged across the country in the runup to the birthday of the globally renowned literary icon.

Former dictator General Yakubu Gowon, who jailed the writer for about two years during Nigeria's 1967-70 civil war, attended a lecture in Soyinka's hometown on Friday, saying: "I have come to Abeokuta for the sake of this particular man, to honour him."

Gowon imprisoned Soyinka on suspicion that he supported Emeka Odumegwu-Ojukwu, who declared a state of "Biafra" in 1967, plunging the nation into war.

An estimated one million people died in the 30-month-long war, mostly of disease and starvation.

Born on July 13, 1934, in Abeokuta, capital of southwest Ogun state, Soyinka cut his literary teeth in the 1950s at the University of Ibadan, Nigeria's premier university, where he studied English literature.

The poet, novelist and playwright has around 30 published works to his name, most of which satirise Nigerian society.

A harsh critic of military, corrupt or inept governments, he fled the country during the regime of General Sani Abacha in the 1990s when the government hounded critics including journalists and academics.

THE recent sad crash of Associated Airlines plane just outside the perimeter fence of the domestic wing of Murtala Mohammad Airport, Lagos exposed, once again, an ugly side of our society, which has become a regular occurrence. As soon as the crash took place, people rushed to the scene. Majority of them were genuine sympathisers […]

President Goodluck Jonathan has assured prospective investors in Nigeria that they have nothing to fear about the possibility of losing their investments to advance fee fraud or any of the other related economic crimes as the countryÃ¢â‚¬â„¢s Economic and Financial Crimes Commission, EFCC, has brought such incidents to the barest minimum. The president who gave the assurance […]

Unidentified attackers have abducted an All Progressives Congress (APC) House of Assembly candidate in Bauchi State. Yusuf Dadiye, who is contesting for the Ganjuwa West constituency seat, was kidnapped on Monday, March 9 on his way to Miya from Bauchi, Punch reports. According to Dadiye’s driver, Danliti Rungo, the abductors forced him to stop the […]