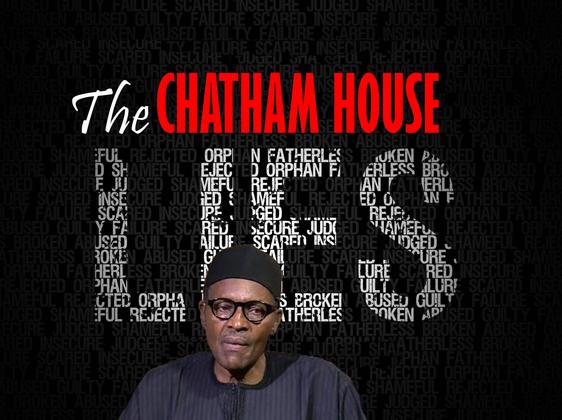 Guardian News – Houston, TX – The basic issues of Muhammadu Buhari’s unpreparedness for a presidential race he is currently engaged in have been worsened by his impromptu trip to the United Kingdom, unearthing more controversies by the hour. Close campaign aides from his party, the All Progressives Congress (APC) had smuggled him to London to seek solutions for his fading fitness, but deceptively claimed the trip was connected to  a proposed engagement in the Chatham House, an independent policy institute based in London. The institute quickly denied any engagement with General Buhari, and in fact, referred our field reporters to their complete event schedule made public in the website at the time.

To save face, Buhari’s aides quickly contacted the Chatham House late last week, to secure a self-sponsored address spot where he would be allowed to read his own script through a live stream, rather than a live audience.  International Guardian gathered that campaign has already circulated notices in the social media, asking all APC members to log in with specified Twitter hatch tags to generate substantial audience. A long script was prepared to coach the General on issues of democracy and the future of Africa. It was also gathered that questions have been prepared ahead and screened while the audience are being deceived into sending in questions for their august cyber guest.

A Chatham House official told the International Guardian London correspondent, Adejumoke Agboola that Buhari’s meeting is restricted and prohibited to  both the public and the media. According to Mrs. Agboola, “Buhari’s camp in London claimed that e-tickets would be provided for the public, but when I asked to purchase one they told me that the event was now full and registration was closed.” Most APC members and their friends in in the UK are already in London to give Buhari a requested support. “I don’t really following the Nigerian politics, but I came with my husband to see Buhari – we live in Liverpool. The funny thing is that we have not even seen him– it’s either one story or the other.”

An initial assessment of the schedule by our newsroom shows that only three major events relevant to issues of Africa throughout the rest of February . Also, only three speakers from different parts of Africa were listed at the time. Maj. Gen. Obed Akwa, the commandant and executive director, Kofi Annan International Peacekeeping Training Centre, Madame Bineta Diop, special envoy for Women, Peace and Security, African Union, and Hon César Mba Abogo, Secretary of State for Planning and Development, Republic of Equatorial Guinea. A late registration put’s Buhari on the list without the usual Chatham House tradition. “It is normal” said one of the institution’s event facilitator. “We try to accommodate all events provided it meets our basic requirements.”

Buhari’s UK travel controversy, especially the Chatham House woes further diminishes his acclaimed impeccable honor, and contradicts APC’s acclaimed mission to fight corruption. In London, Buhari’s itinerary has been an annoying secrecy.  Most campaign members in his entourage claimed that they have been kept out his whereabouts. The Nigerian community who were eager to keep up with activities surrounding his visit were also disappointed. For instance, Buhari, it was gathered did not show up in the first forum quickly put together at the Park Plaza Hotel in Westminster to generate some photo moments for his campaign.  Only his wife, Hajiya Aishatu Buhari and Dolapo Osibanjo, the spouse of the party’s vice presidential candidate and a few other party loyalists showed up at the event.

“For an election just less than five weeks ago, it is unusual that a major contender would jet-off to a foreign land for such long period unannounced without a major reason – I smell a rat,” said Martha Ugowe, a citizen who spoke to us from Lagos . “We are talking about Nigerian voters voting in Nigeria – so how would a visit and meetings in UK help an average voter in a Nigerian village?” she asked.

Five more housemates have been evicted from the on-going Dance with Peter reality T.V show, sponsored by next generation network, Globacom. Their eviction followed   a very competitive outing among the remaining 26 contestants. Tension was rife in the house as the second eviction edition commenced. MX, Tom Tom, Neon and Prince of Team “Get Squared,” […]

At the Estate Sports Club in the southeastern Nigerian city of Onitsha, men troop up to the open-air bar and order a bottle of “Oh Mpa,” the local name for SABMiller Plc’s Hero beer. Oh Mpa means “Oh Father” in Igbo, the language of the area, and is widely regarded as referring to the late […]

ONITSHA—The All Progressives Congress, APC in Anambra State has started shopping for a candidate that will fly the flag of the party in the scheduled fresh election in Anambra Central senatorial zone in March this year. This followed the withdrawal from the race by the party’s candidate, Senator Chris Ngige, who was recently appointed Minister […]