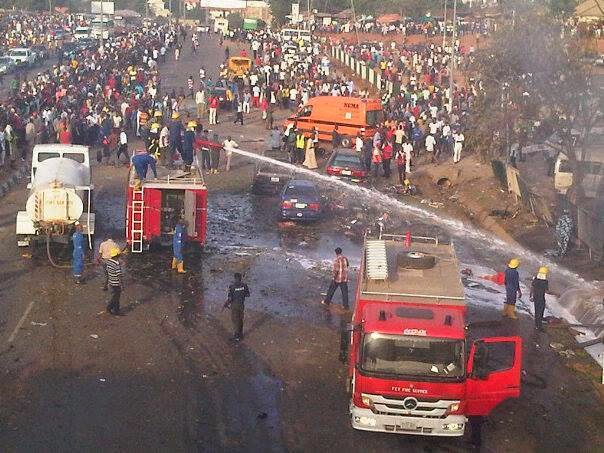 What would have been a black day was averted in Nyanya, the scene of April 14 bomb explosion where over 100 lives were lost, while scores sustained various degree of injuries. Another blast ripped through the area on May 1, killing several people.
The tragedy was averted, penultimate Saturday, when a tanker fully loaded with Premium Motor Spirit (PMS), also known as petrol, fell on a car in front of the NNPC filling station in the area and spilled its volatile contents on the road.
The car with one person inside was damaged beyond repairs, but the victim sustained light injuries, according to eyewitnesses.
It could not be ascertained whether the victim was the driver of the car or a passenger who could not evaluate before the accident.

From under the tanker, the victim was said to have cried for help before people rescued him. He immediately took to his heels.
The atmosphere smelled of gas while the ground was wet with petrol gushing out of the tanker.

The area, right from Nyanya park, down to the NNPC filling station, became tensed waiting to explode with a spark.

Before the arrival of security operatives, Sunday Vanguard gathered that some ignorant residents, mainly women and children, took to scooping the spilled fuel from the tanker, while some people frowned at their action, reminding them of several unfortunate incidents that had happened in the past as a result of spilled petroleum products.

The operatives and men of the Fire Service from Abuja, on arrival, dispersed the women and children.
The road was consequently closed to traffic, to allow fire fighters neutralize the PMS. They sprayed the area with chemical while a towing van from the Federal Road Safety Commission (FRSC) removed the tanker and the car wreckage from the road.

The incident triggered heavy traffic for more than five hours along Keffi /Abuja dual carriage way.
An eyewitness, who claimed to have participated in the operation, Mr Abraham Uwanagbe, narrated to Sunday Vanguard how the driver’s warning prevented the situation from claiming lives.

“This morning, at about 6 o’clock, I was walking up the road. All of a sudden, I saw this petrol tanker rolling back. The cause I would not know, but the driver alerted us by shouting, asking people to run, as he had lost control of the truck. We quickly alerted the drivers of the vehicles and other people in front of him and they started giving way. The luck we had was that the road was not very busy.

“The driver was able to control the truck for some meters. But while he was trying to climb the pavement to enable him stop safely, the back tyre burst.
“While the truck was falling off, he now turned his hand (steering wheel) to cut off the head from the truck. Then, the truck fell on one side on a Volkswagen Gulf car while the head landed safely.

“The driver came down from the vehicle and ran to the Gulf car, to see if he could rescue the person inside, shouting for help. Some people nearby rushed and opened the car door and pulled the victim out.
“We thank God that no life was lost; it is only the car that was damaged beyond repairs. God did not allow the people of Nyanya and Abuja to cry a

For many academics, President  Muhammadu Buhari’s appointment of Mallam Adamu Adamu as Education Minister is a surprise because he is not a professor like other ministers who had led the ministry and he is unknown. Mallam Adamu Adamu who hails from Bauchi State is a graduate of Accounting from Ahmadu Bello University, Zaria. Though, he […]

As the whole world await the official installation of the Ooni-designate, Enitan Adeyeye Ogunwusi as the 51st Ooni of Ife, Ogun and Osun stated in South West Nigeria are to witness a spiritual overhaul of the entire system through the instrumentality of the man of God, Pastor William Folorunsho Kumuyi. Pastor Kumuyi is billed to […]

Is Nigeria serious about tackling corruption?

As President Jonathan handed out awards to celebrate Nigeria's centenary, there was a collective leap of eyebrows when people learnt that former President Sani Abacha was on the list. Many wondered why a military dictator who had plundered the nation was being celebrated? As if people needed reminding, during that same week the United States […]