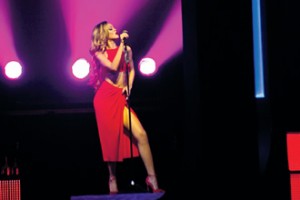 Rihanna returns to Helsinki in support of her seventh album, Unapologetic.

Having kept her fans waiting over three hours for her to arrive on stage at a recent gig in Monte Carlo, who knows when Rihanna will hit the stage at Hartwall Areena on Sunday 28 July. Currently traversing the globe in the midst of a summer tour, the singer returns to Helsinki for the first time since a less than summery set at On the Beach in 2011.

Known to friends and family as Robyn Rihanna Fenty, the singer rose quickly to fame after meeting New York-based music producer Evan Rogers while on holiday in Barbados with his wife. After travelling to meet Jay-Z at Rogers’ insistence, superstardom followed promptly.

Fast forward a handful of years and she is one of the biggest female stars on the planet. Known for such mega hits as Umbrella, Only Girl (In The World), Don’t Stop The Music and We Found Love, to name but a few, Rihanna surfaced again towards the end of last year with the release of her seventh full-length, Unapologetic. Headed by single Diamonds, the singer began touring in support of the release in the States earlier this year.

In between churning out a seemingly endless stream of hits, winning six Grammy Awards, selling some 100 million records and developing her own line of clothing, Rihanna has also dabbled in acting. However, with a performance in 2011’s Battleship sinking without a trace, along with the film, significant appearances have eluded her. Scheduled to make an appearance in the James Franco-Jonah Hill-Seth Rogen starrer This is the End later this year, all this could change.

Our fears for Minister, Babatunde Fashola

About eleven days ago, Babatunde Raji Fashola, former Governor of Lagos State was assigned with a higher national responsibility as Minister of Power, Works and Housing. Before this appointment, many people prominent among them, inhabitants of his own Lagos State worked assiduously to truncate the ambition. As a matter of fact, as soon his successor, […]

He had a child with his one-night stand

My fiance and I got engaged last year and we plan to get married in a few months’ time. A few days ago, a ‘friend’ let it slip that a woman in their street just had a baby for him. I couldn’t believe it but when I confronted him, he didn’t deny it. He said […]

Vice President Yemi Osinbajo, on Tuesday in Abuja charged senators from the North-east to show more than a fleeting concern to the victims of Boko Haram insurgents in the north eastern part of the country. He also asked to step up their personal efforts and commitment to the anti-terrorism war of the federal government to […]