Beggars from Romania have nothing to do with organised crime, as Roma families oversee the begging, according to an expert from Helsinki’s Department of Social Services and Health Care. The police also dismiss claims of connections to organised crime. 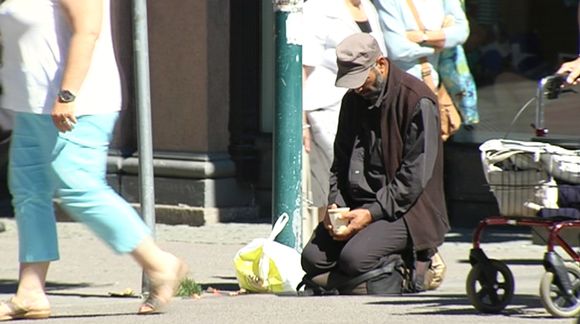 Jarmo Räihä, a senior Social and Healthcare official of Helsinki City, debunks speculations that have surfaced in public discourse and the media in past years. Roma beggars in Helsinki do not have connections to organised crime.

“Some arrive with their own cars. Some passengers pay something for the lift, and fund their trip with income from begging and collecting bottles in Finland”, says Räihä.

According to the social services expert, Roma families decide how begging spots in Helsinki are distributed, and even the countries to which different Roma can travel to beg. Räihä points out that this cannot be equated with organised crime.

Räihä is in support of banning begging, as this could send a message to the beggars’ countries of origin that there is no point travelling to Finland to beg. As another alternative, Räihä proposes that cities adopt rules and regulations to allow for more effective interventions.

The police investigated the case of Roma beggars at the start of July. According to the investigation, the Roma have come to Helsinki of their own accord, and they are not victims of human trafficking.

“They are here voluntarily. No one gives them orders, which means human trafficking is not involved”, said Inspector Kari Niinimäki from the Helsinki Police.

In Helsinki, the National Coalition Party has called for banning begging based on claims of its connections to human trafficking and organised crime.

STAVANGER, Norway (AP) — Residents of the small Norwegian town of Rjukan have finally seen the light.   Tucked in between steep mountains, the town is normally shrouded in shadow for almost six months a year, with residents having to catch a cable car to the top of a nearby precipice to get a fix […]

Finland: May Day weather may disappoint

Yle meteorologist Henri Nyman says that the current unsettled conditions are likely to prevail come next week’s May Day holiday While places like Poland are already enjoying summery conditions, any hopes of similar weather in Finland for the holiday next week have been dashed by Yle meteorologist Henri Nyman. According to the weatherman any vestiges […]