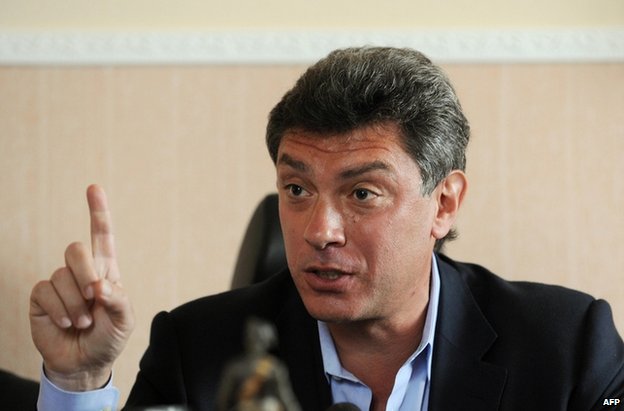 He was reportedly shot near the Kremlin while walking with a woman.

He died just before a march in Moscow against the war in Ukraine which he was actively promoting.

In a recent interview, he had said he feared Russian President Vladimir Putin would have him killed because of his opposition to the war in Ukraine.

He had earned a reputation as an economic reformer while governor of one of Russia's biggest cities, Nizhny Novgorod.

Thorbjorn Jagland, secretary general of the Council of Europe, condemned the killing, saying in a tweet: "I am shocked and appalled key opposition leader Boris Nemtsov was shot. Killers must be brought to justice."

According to Russian-language news website Meduza, "several people" got out of a car and shot him.

He was shot in the back with a pistol from a white car which fled the scene, Interfax's source said.

One of the politician's colleagues in his RPR-Parnassus party, Ilya Yashin, confirmed Mr Nemtsov's death.

"Unfortunately I can see the corpse of Boris Nemtsov in front of me now," he was quoted as saying by Russia's lenta.ru news website.

"At the Bolshoy Zamoskvoretsky Bridge. I see the body and lots of police around it."

In his last tweet, Mr Nemtsov sent out an appeal for Russia's divided opposition to unite at an anti-war march he was planning for Sunday.

Speaking earlier this month to Russia's Sobesednik news website, he had spoken of his fears for his own life.

"I'm afraid Putin will kill me," he said in the article on 10 February (in Russian).

I believe that he was the one who unleashed the war in the Ukraine," he said. "I couldn't dislike him more."

Mr Putin has been widely accused of fomenting the bloody rebellion in east Ukraine – an accusation he denies.

Almost 5,800 people have died and at least 1.25 million have fled their homes, according to the UN.

The Ukrainian government, Western leaders and Nato say there is clear evidence that Russia is helping the rebels with heavy weapons and soldiers.

Independent experts echo that accusation while Moscow denies it, insisting that any Russians serving with the rebels are "volunteers"

The Draconid meteor shower will sweep across U.S. skies early Monday evening just after sunset.   Although not among the showiest showers of the year, the Draconids stand out for one reason: Unlike most meteor showers, they are best seen in the evening rather than before dawn. That makes them a great introduction to sky-watching […]

Who wants to be a President? This presidential race is a more noble cause to bring a helpful font to dyslexic people around the world. To make it easier for dyslexics to read, Christian Boer and partner Robert Walder have started a quite remarkable crowdfunding project. The noteworthy Kickstarter campaign is giving individuals and companies […]