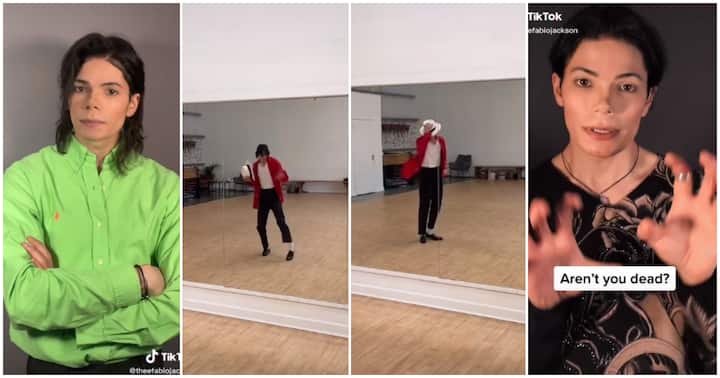 A man who has a striking resemblance with the late King of Pop Michael Jackson has continued to ride on that fame The doppelganger identified as Fabio Jackson has amassed a large following of 2.1 million fans on social media platform TikTok Keeping his fans entertained, the social media personality makes videos in which he break-dances to the singer’s songs and other engaging contents

What would you do if you found out that you have a striking resemblance with a widely-known celebrity? For a young man identified as Fabio Jackson, a Michael Jackson doppelganger, it means more than just going viral.

Since his discovery some years ago, Fabio has taken advantage of his fame to become a content creator and this has seen his followers on social media grow tremendously.

On TikTok, his account @theefabiojackson has over 2.1 million followers.

In one of his videos, the American could be seen dressed in the late singer's kind of outfit as he did a break-dance before a large mirror. The young man has however come under fire for doing multiple surgeries to look more like Michael Jackson, Famous People Today reports. People who come across his videos for the first time can't help but wonder if Michael Jackson reincarnated.

Previous post Amaechi didn’t lose. Neither will Wike lose. It is the people of the East that lost a golden opportunity

‘Getting a Second Wife Brought Me Blessings.’ Yul Edochie’s

June 9, 2022
Manage Cookie Consent
To provide the best experiences, we use technologies like cookies to store and/or access device information. Consenting to these technologies will allow us to process data such as browsing behaviour or unique IDs on this site. Not consenting or withdrawing consent, may adversely affect certain features and functions.
Manage options Manage services Manage vendors Read more about these purposes
View preferences
{title} {title} {title}
Go to mobile version
%d bloggers like this: