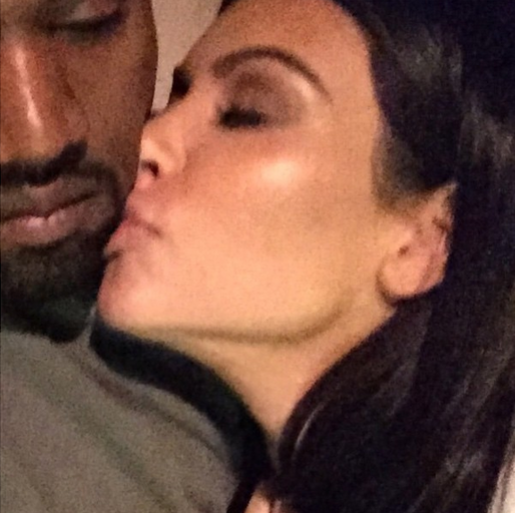 This pic above sef, e get as e bi. Kim shared it on instagram last night and wrote goodnight. Kanye looks a little uninterested. Anyway, back to the subject matter, there are reports (probably untrue) that Kanye has lost interest in sexing his wife on a regular basis & Kim has ordered him into sex therapy

From The National Enquirer

"Kim Kardashian has ordered Kanye West into sex therapy because he’s lost his libido! Kim is so offended that Kanye’s not as hot for her as he used to be. He’s so focused on his work that he’s barely spending any time with her,” said a family source. “And when they are together all he wants to do is sleep or play with North. “Rejected Kim, whose stress about her troubled marriage has prompted a serious psoriasis flare-up, signed them up for therapy classes to get the spark back into their relationship.”

Mama G crying  for the Kidnapped Girls as she is being consoled by Aki While Speaker Ikoforuju looks on  Nigerian Celebrities today marched for the kidnapped Chibok Girls in Lagos. The March which started at Allen Avenue Roundabout with the protesters shouting "Don't sell our girls. They are humans not animals" Nolly wood stars Chinedu […]

Pentecostal faith in Nigeria is a veritable goldmine

The Pentecostal faith in Nigeria is a veritable goldmine, judging by the opulence of most of its pastors. The church that hang his existence  on miracle, speaking in tongues, profit oriented  and prosperity messages is rapidly eating deep in the heart of Africa and Nigeria

Nollywood: I Almost Ended Up As A Prostitute” – Mercy Johnson Okojie Confesses

Mercy Johnson Okojie turned 29 years today the 28th of August 2013 and here is a message from the mother of one to her fans… Today, I thought of many things I would love to have as birthday gifts and the many dreams I am still pursuing. In all of this I'm not losing sight of […]