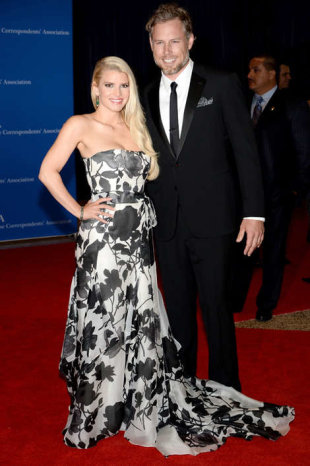 Jessica SImpsonThe proverbial ink on Jessica Simpson's weekend wedding to Eric Johnson has barely dried, and the details from their romantic nuptials at the San Ysidro Ranch in Montecito, California, wedding keep rolling in.

For starters, Simpson, she of the "Chicken of the Sea" debate of 2004, somewhat revived her ditzy image when it came time to recite her vows according to E! News. After Johnson choked up and had to start his vows over, Simpson accidentally addressed her groom by her own name! She laughed it off and started over again, but it sounds like a lighthearted moment during a very emotional ceremony.

As we know from the sketch and description of her custom Carolina Herrera wedding dress, Simpson's minor vow obstacle happened while she was wearing a gorgeous, embellished gold gown.

Thankfully, we learned even more details on that show-stopping dress today, courtesy of Herrera herself! People shared an exclusive video of the iconic designer going through her thought process in creating the wedding dress. In the video, seen below, Herrera explains that she drew inspiration from the bride and from a portrait of Empress Elisabeth "Sissi" of Austria painted by Franz Zaver Winterhalter in 1865.

"It reminds me of the way I want you to look," Herrera says in the video. "You told me before you wanted to be very regal. I thought this is fantastic for the whole idea."

As most brides do, Simpson got down to business when it came to losing weight and getting in shape to fit into her gorgeous gown. According to Us Weekly, the bride-to-be chose a strict diet plan. "Jessica did a vegan diet for about two weeks leading up to the wedding," a source says.

Not only that, she "also got quite a few B12 shots," according to the source. For her skin, Simpson "opted to get sugar dermabrasion on her face," the source notes, adding that she chose sugar over salt "so it would be less harsh."

If that's the price she paid for beauty, then it paid off – she was a stunning bride!

9 RAPPERS WHO PRETENDED TO BE RICH, BUT WERE ACTUALLY FLAT BROKE

You see rappers on TV shining like crazy and bragging about how much money they have.  But most of this is a really ugly lie and one that makes black people look as ignorant as any minstrel show in the history of our country.  You’ve seen what rappers say about themselves on TV, but here’s […]

She is one of the old faces, I mean, for her to have spent 12 years in the industry shows that she has really come of age. But Doris, mother of one, will not hide from revealing the intrigues behind the producers and actresses before making a complete film. She was recently asked if she […]