A video that TMZ alleges is of Beyonce's younger sister having an altercation with the superstar's husband, Jay Z, has surfaced online.

In what the site says is surveillance video from an elevator taken the night of the recent Met Gala in New York, a woman who resembles Solange Knowles enters just before a man who appears to be the rapper. Words seem to be exchanged, and then the woman lunges at and begins striking him before an unidentified man grabs and holds her. 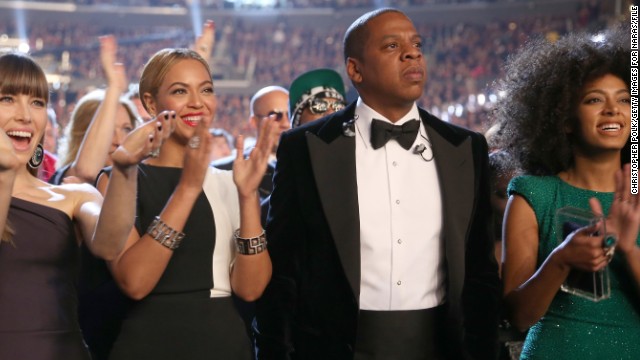 Photos: Beyonce through the years

A woman who resembles Beyonce calmly stands in the corner of the elevator during most of the altercation.

It is not yet known what caused the fight.

CNN has reached out to representatives for Solange, Jay Z and Beyonce. Solange's rep is not offering comment.

A representative for The Standard, the hotel where the incident is believed to have occurred, released this statement to HLN:

"We are shocked and disappointed that there was a clear breach of our security system and the confidentiality that we count on providing our guests," the statement said. "We are investigating with the utmost urgency the circumstances surrounding the situation and, as is our customary practice, will discipline and prosecute the individuals involved to our fullest capacity."

Beyonce and Jay Z recently announced their "On the Run" tour, which is scheduled to take them to 16 cities this summer. One fan tweeted, "They better make it to Baltimore first lol" (Baltimore is one of the cities slated for the tour), while another retweeted that and added, "Yo ain't trying miss the show over no damn solange."

The memes also came fast and furious, as well as tweets with the hashtag #WhatJaySaidToSolange.

One featured a picture of Solange and the caption "Solange attacks Jay Z? The first hit she's had in years."

Another used photos of actor Jake Gyllenhaal courtside with Beyonce and Jay Z at a recent basketball game. The caption imagined Beyonce saying to Gyllenhaal "…And then Solange was kicking him and screaming in the elevator" before Jay Z turned to the actor and said in the caption "…And she just stood there," gesturing to Beyonce

Pregnant model drops out of Dubai school, relocates to SA

Pulse carried the exclusive news on January 6, 2015 that former most beautiful girl in Nigeria Anna Banner is pregnant for popular high life singer Flavour Nabania; real name Chinedu Okoli. City People magazine carried the news that Anna Banner who was enrolled in a univeristy in Dubai was expelled from school because of her […]

Adewale Akinnuoye-Agbaje is one of the most recognizable Nigerian actors in Hollywood. You might not know his name, but I guarantee that you’ve seen him in one (or two or three) of your favorite Hollywood movies or television shows. Don’t believe me? You saw him in one of my favorite movies, The Mummy Returns, in […]

After trailers and photos were released months ago, sultry actress Afrocandy has finally released her movie Destructive Instinct on DVD.   Her post on Facebook reads:    At last, I have won the Battle ! DESTRUCTIVE INSTINCT FINALY OUT AFTER ALL THEY DID TO STOP ME God has shown them he is the only […]