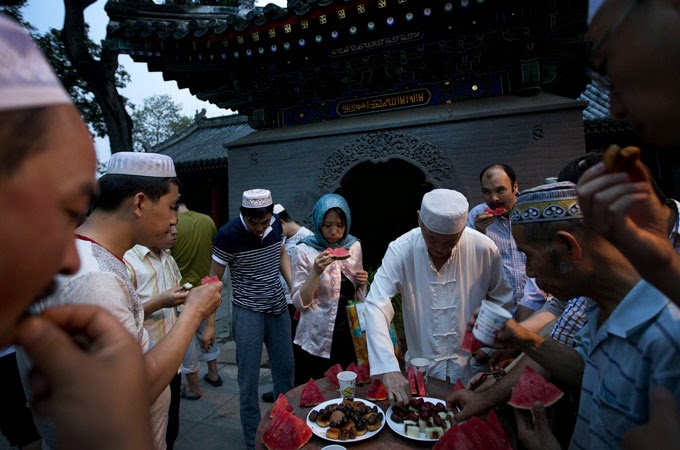 Students and civil servants in China's Muslim northwest have been ordered by the state to avoid taking part in traditional fasting during the Islamic month of Ramadan.

Statements posted in the past week on websites of schools, government agencies and local party organisations in the Xinjiang region said the ban would protect students' wellbeing and prevent the use of schools and government offices to promote religion, the AP news agency reported on Thursday.
Statements on the websites of local party organisations said members of the officially atheist ruling party should also avoid fasting, although the month of Ramadan, which began at sundown on June 28, is observed by Muslims.
"No teacher can participate in religious activities, instill religious thoughts in students or coerce students into religious activities," said a statement on the website of the "Number 3 Grade School" in Ruoqiang County in Xinjiang.
The news agency reported that cities in Xinjiang had set up news portals saying that fasting was detrimental to the physical wellbeing of young students, and also have called in retired teachers to stand guard at mosques in order to prevent students from entering.
Similar bans have been imposed on fasting in the past. This year's ban was unusually sensitive because Xinjiang is under tight security following a number of attacks that the government blames on Muslim rebels who allegedly have ties with foreign armed groups.
On Tuesday, authorities in some communities in Xinjiang held celebrations of the anniversary of the founding of the Communist Party and served food to test whether Muslim guests were fasting, according to Dilxat Raxit, spokesman in Germany for the rights group World Uyghur Congress.
"This will lead to more conflicts if China uses coercive measures to rule and to challenge Uyghur beliefs," Dilxat Raxit told AP.
Violence has escalated in recent years in Xinjiang. The ruling party blames rebels who it says wants independence, while members of the region's Uyghur ethnic group complain that discrimination and restrictions on religion, such as a ban on taking children to mosques, fuels anger at the ethnic Han Chinese majority.
Wary of religious activities
An attack on May 22 in the regional capital of Urumqi by four people who threw bombs in a vegetable market killed 43 people, including the attackers.
On June 22, police in Kashgar in the far west said they killed 13 attackers who drove into a police building and set off explosives, injuring three officers. Authorities have blamed two other attacks at train stations in Urumqi and in China's southwest on Muslim rebels.
The government responded with a crackdown that resulted in more than 380 arrests in one month and public rallies to announce sentences.

According to AP, the ruling party is wary of religious activities which it worries might serve as a rallying point for opposition to one-party rule. Controls on worship are especially sensitive in Xinjiang and in neighbouring Tibet, where religious faith plays a large role in the local cultures.

MANILA, Philippines (AP) — A ferry with nearly 700 people aboard sank near the central Philippine port of Cebu on Friday night after colliding with a cargo vessel, and a survivor said he saw bodies in the sea.   The captain of the ferry MV Thomas Aquinas ordered the ship abandoned after it began listing […]

BEIJING (AP) — A strong earthquake struck a rural part of western China on Monday morning, killing at least 20 people and injuring 296, according to the local government.   The quake hit near the city of Dingxi in Gansu province, a region of mountains, desert and pastureland with a population of 26 million. That […]

BEIJING (AP) â€” A fire on a passenger bus in northeastern China killed at least 10 people and injured 17 on Wednesday, officials said, in the country’s second deadly bus fire in less than a week.   The fire broke out aboard a crowded bus in the city of Jilin early Wednesday morning as the […]