Former Nigeria star Tijani Babangida has tipped Chelsea midfielder Mikel Obi to be the key in Nigeria’s quest for a third AFCON title.

The ex-Ajax Amsterdam winger told MTNFootball.com that Mikel’s displays for Chelsea as well as his performances in the Eagles have shown that he will play a pivotal role in the Eagles in South Africa.

He also spoke generally about Stephen Keshi’s team at the 2013 AFCON.
The interview:

MTNFootball.com: What can you say about the exclusion of Martins, Osaze and Taiwo from the AFCON?

Babangida: Keshi knows better because he gave these players a chance to prove themselves, so if he makes any decision now as regards them, it could only be best for the team.

But all the same I still believe Obafemi Martins ought to be in the team because he has scored almost every weekend in Spain. I am also surprised that Keshi never gave Michael Enaramo a chance because he has also been scoring often for his Turkish club. Nigeria have not been fair to Eneramo.

Who do you think should be in the team among the three major omissions?

Martins. His experience would be missed in South Africa. Even though we are looking for younger players, his current form shows he needs to be there. Don’t forget at the France 1998 World Cup the late.Rashidi Yekini was included due to his experience so that if things didn’t go well with Victor (Ikpeba) and co in the strike force, we could easily call up his experience. 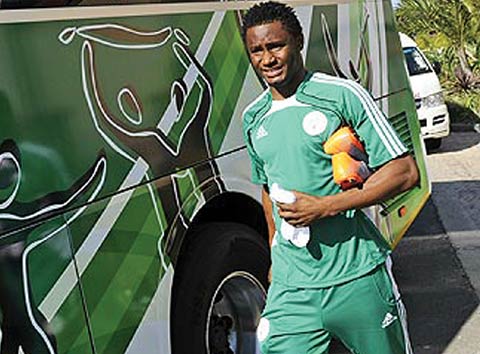 Who are the other players who ought to be in South Africa, but are not?
Sani Kaita. His presence is needed in the team’s midfield.

He is born to fight and win battles in the midfield. Will the home-based players not struggle at the AFCON as the league has ended since September?
Not really. I am sure Keshi knows those ones who are capable of playing for him and playing those friendlies will make them ready for the big one in South Africa.
Which is Mikel’s best position in the Eagles?
The position he has been playing in Chelsea.
Who among the players do you think will lift Eagles when the chips are down in South Africa?
Mikel of course! With his current form and what he achieved last season as well as his recent performances for Eagles, it is very clear he is our class act.
What was in the 1994 and 1996 team that you think the current Eagles need to have to be world beaters?

The 1994 Eagles were a generation of stars with high level of dedication. That was what the 1996 Olympic team followed. If the current set of players could also manage this, the Eagles will fly again.

NIGERIA: You have my full support, Jonathan tells Keshi

What looked like a replay of defining moment of the Westerhof era when some sports administrators in the country were bent in frustrating him, happened yesterday at the Presidential Villa, Abuja when President Goodluck Jonathan assured Keshi of his full support. Westerhof  was reported to have complained to IBB when he had opportunity to meet […]

MALI coach Patrice Carteron says they are ready for Ghana after a morale-boosting win against Niger in their first group match of the 2013 Africa Cup of Nations. The Eagles earned the first victory of this year’s finals as all the teams in Group A drew their matches on Saturday, while in Group B Ghana […]

Eagles coach Stephen Keshi has insisted on taking a half-fit Gabriel Reuben to the AFCON, officials have specially informed MTNFootball.com The Kano Pillars defensive midfielder has not fully recovered from a long-term groin injury contrary to official statements. His recovery was also slowed down when he went down to chicken pox before the warm-up game […]