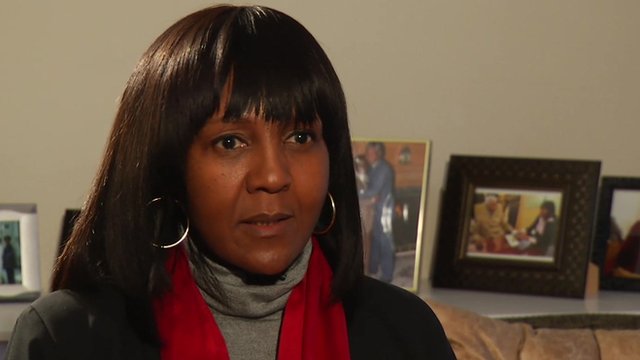 A granddaughter of Nelson Mandela, who remains seriously ill in a Pretoria hospital, has said she is hurt by a continuing family feud.

Family members have been in dispute over the reburial of the bodies of three of Mr Mandela's children.

Ndileka Mandela was speaking to the BBC on the eve of Mr Mandela's 95th birthday.

She also described how difficult it had been for the family to cope with his critical illness.

The dispute has pitted 16 members of the Mandela family, including his wife Graca Machel, and local chiefs against Mr Mandela's eldest grandson and traditional tribal chief, Mandla.

They went to the Mthatha High Court on 3 July to force the remains of three of Mr Mandela's children to be exhumed and returned to his home in Qunu, in Eastern Cape province.

Mandla had moved them two years ago to his homestead in Mvezo, 22km (14 miles) from Qunu, apparently without consulting the rest of the family and elders of the AbaThembu royal house, of which Mr Mandela is a member.

An affidavit filed with the court alleged that Mandla had relocated the graves to ensure that Nelson Mandela would be buried in Mvezo.

The remains, now reburied in Qunu, are of Makgatho Mandela, Mandla's father who died from Aids-related diseases in 2005; Thembekile, who was killed in a car accident in 1969 and was the father of Ndileka Mandela; and Makaziwe, Nelson Mandela's first daughter who died when she was nine months old.

Ndileka Mandela said the argument over the graves was unfortunate but would not split the family as "blood is thicker than water".

"There is no way that I can never forgive but it's just that right now I'm still hurting."

Ndileka Mandela, an intensive care nurse by training, also complained at the intrusive nature of media questioning since Mr Mandela was admitted to hospital with a recurring lung infection on 8 June.

She said relatives had been asked "Is it over with Mr Mandela?" and "Is he on life support?"

The dispute has become increasingly bitter, with Mandla accusing some individuals of "jumping on the Mandela bandwagon" and "trying to sow divisions and destruction" in the family.

Anasiudu: If irreligion was taken away…

THE above heading is my counterpoint to Prof. Wole Soyinkaâ€™s assertion: â€œIf Religion Was taken Away Iâ€™d Be happyâ€, quoted in The Guardian of October 14, 2012, page 40. The Nobel Laureateâ€™s statement was made at the recent Hay Festival in Mexico in the context of his strong condemnation of the murderous brand of religious […]

Kenya: President Kibaki: Why I believe in Konza Technology City

The number of Malian people crossing into neighboring countries goes on to rise amid the French-led war on Mali. According to reports by the United Nations, over 4,000 Malian refugees have arrived in Mauritania alone since January 11, when France launched a war on Mali under the pretext of halting the advance of fighters in […]