Church property worth N3billion destroyed as hoodlums carted away over N15million offering, tithes money
For a moment, it looked as though the demolition of the altar and the entire building that housed over 20,000 worshipers of the Bride Assembly was a joke unfolding in a manner that insulted the sensibilities of the onlookers, but it turned out to be real as members watched helplessly how the sacred house of God was cruelly demolished.

The Church which was located on Endeavour Crescent, Odofin, Park Estate, Off Ijesha, Bus-stop, a stone throw to the Lord Chosen Church, Lagos, was demolished early December, by officials of the Lagos State Ministry of Physical Planning and Urban Development.

When Saturday Vanguard visited the place, members were seen packing and sorting through the debris. A few of them however who managed to utter a few words said: â€œWho could have ordered this assault on Godâ€™s altar? Why would the demolition be so maliciously done? Why would you demolish a place of worship or any other place without notice, especially when the matter concerning the property is still pending in court?â€ they queried.

But the leader and General overseer, Pastor Moses Alu including the members appeared to be set for a legal battle to seek redress on the injustice perceived to have been done on them by those who according to them, illegally orchestrated and carried out  demolition of the church and properties worth over N3billion.

According to the Public Relation Officer of the Church, Deacon A . Eric, â€œat about 9am, what could be likened to an army of occupation invaded the church. They came in a convoy of cars, buses, hiluxes and a black maria (from Lagos State Ministry of Physical Planning and Urban Development). They were given protection by about 40 armed policemen and when we asked if there was any notice, they said they have sent a notice a copy which they could not produce.â€

He said over N3billion property were destroyed while about N15million cash which was realised from offerings and tithes were carted away by hoodlums who took advantage of the situation  shortly after the demolition.

â€œThey came with about forty policemen in a convoy or cars, with a trailer carrying a caterpillar which they used for the demolition. They rushed to the General overseerâ€™s office and that was the first place they demolished. All the bullet proof doors were destroyed, including 20 other offices. We watched helplessly, as there was no prior notice to take away our properties. Most of our equipments, television, monitors among those things we used in our broadcast were destroyed.â€

He disclosed that the church had petitioned Lagos State Governor, Babatunde Fashola while the Church lawyer, Barrister Ozoan was preparing for a legal battle.

Narrating how the church acquired the land, Deacon Eric said: â€œIn 2005, we paid N50million to acquire this place from the Onitire family represented by Oloto who is well known here.

â€œWhen we came here, it was not habitable because there were different kinds of reptiles here. Besides, all the roads leading to this place were done by the church. Sometime in 2009, we were told that this place had been allocated by the government to one Alhaji Kamorudeen Bolarinwa. We were suprised and so we went to court. Since that time, the mater has been in court, until that Wednesday, December, 5.â€ 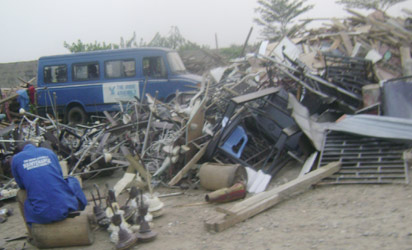 He continued: â€œLeading the assault was a bulldozer which a trailer in their convoy had conveyed to the place. Before the church security men could ask any question, some frightening and armed youths, who were part of the demolition squad headed straight for the block which housed the offices of the Overseer, Deputy Overseer and their personal assistants.

â€œThese young men who were on a mission and who seemed to know what they were instructed to do, in a commando style brought down the bullet-proof doors to the office, destroying everything in sight.

â€œThey were quickly followed by the bulldozer which tore down other offices including the administration office. The next action was to start knocking down the pillars of the auditorium (an auditorium that seats over 20,000 people), and the auditorium fell. Not satisfied and under further instructions, the bulldozer went ahead to smash and destroy everything of importance â€“ roofing sheets, chairs, Plasma and flat screen television sets, ceiling and standing-fans, computers, laptops, printers, water dispensers,among others. Twenty other offices, which included the childrenâ€™s auditorium, the Ministersâ€™, IT/TV, choir, Library, medical and press offices were also destroyed.

â€œAt the end of the invasion, what was once a beautiful environment lay in ruins and the demolition squad left the way they came.â€

He stated that while this was going on, the members most of whom had finished a vigil prayer watched helplessly while the whole place where they congregated to worship went down in ruins. He attributed the calmness of the members present during the demotion as reflection of the peace message of the General Overseer on a weekly basis.

â€œIf there was anything worth commending, it is the spirit exhibited by members of the church. Though painful, no member was violent, even in the face of a sudden attack by about forty hoodlums who unleashed mayhem on a helpless congregation on the third day of the programme, before the timely intervention of the police who arrested some of the hoodlums. They showed oneness and resilience. This exemplary conduct is no doubt, due largely to the peace message churned out weekly from the pulpit.â€

He continued: â€œWe began the evacuation and clearing of the debris. This was completed the following day, Thursday, preparing the ground for the Friday vigil which was held under the tent. And as if to shame the enemy, an unprecedented crowd turned up for the vigil.

â€œIt was believed that the intention of the enemy was to frustrate the camp and they were doing all they could to stop the programme, â€˜but to God be the gloryâ€™; church members declared â€˜the plans of the enemy frustratedâ€™. Since then, the annual December camp (6 nights of vigils) opened on Monday,10th December and other programmes have witnessed very large turnout of worshippers with the Lord visiting His children with miracles, signs and wonders. How else could God manifest Himself when a larger crowd turned out on the 3rd day of the camp which was held in the open (without tents).

But who are the enemies whether real or imaginary? He stressed that it was surprising that while most of men of God Christians alike, far and near came, and called to commiserate with the church, â€œour brothers at Lord Chosen here who are very close to us did not show up neither did they call to express sympathy.â€

All attempts to get the reaction of Lord Chosen church, proved abortive. The Public Relation Unit of the church declined comment while attempt to speak with the General Overseer also failed. Saturday Vanguard was told that only one pastor Chidi could facilitate a chat with the Overseer just as the telephone number made available to the reporter remained switched off.

As members of the Bride Assembly defied the discouraging situation and yet congregate under tents and canopies day and nights for worship, a member who had apparently spent more than 24 hours repairing some of the damaged ceiling fans and clearing some debris, was prompted by Saturday Vanguard to comment on the perceived enemies, he enthused: â€œwhat else can I say, but certainly, the bride will triumph and the Lordâ€™s name will be exalted.â€

Special Assistant to the President on Diaspora, Mrs. Bianca Ojukwu, has ex-pressed optimism that her husband, Dim Odumegwu Ojukwu, who is currently undergoing treatment in a London hospital, would soon be discharged. Speaking with journalists at the Leyton Marsh Fields, London, venue of the 2011 Nigerian Carnival United Kingdom (NCUK) at the weekend, Bianca […]

Kenyans are outraged that three men accused of gang-raping and dumping a girl in a pit latrine were ordered by police to cut grass as punishment.   The 16-year old was attacked after returning from a grandfather's funeral in a village in western Kenya, Kenya's Daily Nation newspaper reports.   Her back was broken during […]

Over 200 witch doctors rounded up in Tanzania

Over 200 witch doctors have been rounded up in Tanzania as part of a campaign against the wave of murders and attacks targeted on albinos. The operation was carried out in several regions in the East African country that saw about 225 unlicensed traditional healers and soothsayers. This operation will be extended to cover all […]