Chris Brown is scheduled to perform in Stockholm, Sweden on November 19, 2012.
The issue now is that not everyone in that country wants him there.
As soon as promo for the concert started, protesters started plastering pictures of Rihanna's injured face all over town.
See more after the cut: 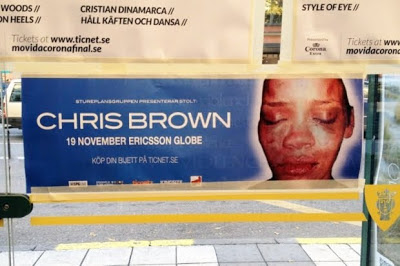 Posted on May 1, 2014 Author RAJAB MUKOMBOZI

Ntoroko-Ms Diana Kategaya, a widow of former deputy premier Eriya Kategaya has accused police of stealing 32 cows from the family farm in Lyantonde District. Ms Kategaya on Tuesday said following family members’ disagreements on the management of the deceased’s estates and alleged stealing and sale of some of the property in Nsiika, Lyantonde District, […]

A Zambian man, Goliath Nyirenda, 27, is facing 15 years in jail after being convicted of sexually abusing a chicken which later died. Mr Tiwilili said the offence was a serious one which carried a maximum sentence of 15 years and fell under the jurisdiction of the High Court. Nyirenda was convicted of one count […]

Nigerian students project head tells it all in Barbados

Ever since 90 Nigerian students set foot in Barbados in December to pursue a nine-month study programme at the Barbados Community College (BCC) in tourism and hospitality, their presence has been shrouded in controversy. Among the main contentious issues were complaints of poor accommodation and bad food at Casa Grande Hotel at Oldburyin St Philip, […]