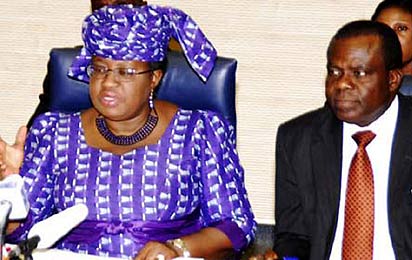 ABUJAâ€” Contrary to reports that the federal government has finally removed fuel subsidy, the Coordinating Minister for the Economy and Minister of Finance, Dr. Ngozi Okonjo-Iweala, disclosed yesterday, that Goodluck President Jonathan was sill consulting and would announce his decision on the issue at the end of the consultations.

â€œMr. President is consulting widely on the subsidy issue.  He has been consulting with various stakeholders in the country, including private sector operators, students, religious leaders and others.  At the end of the wide consultation, we will give him room to take a decision,â€ she said at the briefing on the 2012 budgetary allocations in Abuja.

Thrice, journalists tried to glean information from the minister and each time she stuck to her position that the President was still consulting on the subsidy which has become an extremely volatile issue.

â€œI know you will come through various ways to make me say something on the subsidy but what I have told you earlier is the position.  The President is still consulting.  His decision will be made public at the end,â€ she insisted.

On the N1.1 trillion deficit, Dr. Okonjo-Iweala disclosed that  N794 billion would be borrowed from the bond market but added that the federal government was taking steps to ensure that it reduced the borrowing which stood at N852 billion, in the previous fiscal year.

The minister who tagged the 2012 budget â€œAction Budgetâ€,  disclosed that the 2011 fiscal year would end on December 31, just two weeks from now and that all unutilized funds by the ministries, departments and agencies of the federal government must be returned to the treasury immediately after.

According to her, of the N1.146 trillion capital budget in the 2011, N830 billion was released of which 60 per cent of the released sum had been utilized as at the end of November.  She was optimistic that at the end of the fiscal year, implementation could rise to as much as 70 per cent.

She attributed the level of performance of the budget to the several issues it had to contend with, especially the late passage of the Appropriation Bill into law which was done only in May.

In the next one year, the minister said that the administration would work assiduously towards the completion of the 6000 on-going capital projects across the country and that a template was being developed to improve the quality of the projects.

On the heavy recurrent budget at the federal level, the minister said the Jonathan administration was determined to cut down on recurrent budget and gradually increase capital budget until a ratio of at least two-third was achieved.

â€œIf we reduce the recurrent budget to two-third by 2015, then we will have achieved somethingâ€, she said, adding that the on-going biometrics data collection among government employees was a veritable tool towards its realization.

Dr. Okonjo-Iweala disclosed that the biometrics exercise in the police, brought the wage bill from N1.5 billion per month to a mere N500 million, per month, an indication that a huge N1 billion was going to ghost workers and ghost pensioners each month.

She said that the federal government would pull through with the exercise which she said was critical in reducing recurrent budgets, as it has become evident that the payroll needed to be cleaned up.

The minister also explained the high security budget which topped sectoral allocations with N921.91 billion, saying that the figure represented the net allocation to Defence, Police, Ministry of Police affairs, Ministry of Interior,  office of the National Security Adviser and all security agencies.

She also disclosed that the 2nd Niger Bridge, Onitsha would receive attention in the 2012 budget as it was already being designed and would be executed under a Public Private Partnership.

According to her, budgetary provision have been made for the project and has been equally accommodated in the medium term framework in which provisions would be made for it for the next  two or three years.

Dr. Okonjo-Iweala added that part of the strategy of the federal government was to boost youth employment through the introduction of public works programme especially in the poorest parts of the country.

On the $70 per barrel crude oil benchmark, the minister explained that the decision to reduce it from the initial $75 per barrel was a product of wide consultation with oil industry experts in the country and abroad and that there was a convergence of opinions that $70 per barrel was comfortable.

Currently, the minister said, earnings into the Excess Crude Account was about $4.2 billion and that the Sovereign Wealth Fund would be utilized for boosting infrastructure facilities as well as play the role of a stabilization fund.

On the implementation of the budget, the minister admitted that there was distrust among Nigerians towards government programmes and projects but that the administration should be given a chance to prove its seriousness to deliver on its promises.

She spoke extensively on reform programmes in the agriculture sector and ports which according to her, would significantly impact on both job creation, output, industrialization, as well as the conservation of foreign exchange for the country.

Her words: â€œImplementing the reforms that are laid down in this budget, commitment is key.  Let me just give you one example of this reform which we have already embarked upon.  So we are not just talking of what we will do.  We have embarked on trying to expedite the processing of goods by the exporters through the ports.

Action is on as I speak and there is a private sector team monitoring it in order to be able to give out first hand information to Nigerians.  So it is not going to be what the government says.  The action is on; we have already put action to reduce the number of agencies at the ports.

â€œWe took action through the use of some of the bureaucratic requirements that traders and exporters are being asked to go through at the port. I think as time goes on we will see one by one these groups report that these actions are being taken.

â€œYou heard what Mr. President said in his speech that no longer does he want to hear or tolerate three to four weeks of clearing goods when we could go down to a week or 48 hours and that is what we are driving towards so with that action alone you will know that action is on.

â€œYou just saw that we are not talking we have guaranteed for this year 70 percent in principle of about 30 billion Naira for farmers to get input supply.  I donâ€™t know what else is implementation and we did it in time for the planting season so that farmers can get seeds and fertilizers.

â€œFor the first time we have done that and the banks and farmers and the input suppliers are working together.  So this is not academic.  I think we can signal to the Nigerian public by doing some specific actions like those I have pointed out.

LAGOSâ€” Meanwhile, the Nigeria Labour Congress (NLC) has described the 2012 budget proposal presented to the National Assembly last Tuesday by President Goodluck Jonathan as anti-people and a disaster waiting to happen. This position was contained in a statement issued yesterday by the Acting General Secretary of NLC Comrade Owei Lakemfa.

The NLC scribe further accused the Federal Government of designing the budget to suit the interest of the World Bank, International Monetary Fund (IMF) and their local lackeys, adding that it is a declaration of war on the Nigerian masses.

According to the statement: â€œA critical perusal of the year 2012 budget proposal submitted to the National Assembly by President Goodluck Jonathan yesterday (Tuesday) showed clearly that the present government has no intention to lead the country out of the present socio- economic crisis.â€

The NLC scribe therefore called on Nigerians to get ready for a general strike and street protests adding that the NLC leadership would meet next Tuesday to deliberate on how to organise the protests.

He also called on the National Assembly to reject the Presidentâ€™s budget proposal.

The statement further reads: â€œThe budget, which was tagged: Budget of Fiscal Consolidation, Inclusive Growth and Job Creation, is actually an anti-peoples budget designed purely in the service of the World Bank and International Monetary Fund (IMF) and their local lackeys who dictate to the Nigerian government. It is a disaster waiting to happen.

â€œThis further attempt to impoverish workers and the Nigerian poor, is coming at the heels of increased tariff on electricity, the move to massively sack workers in the name of merging parastatals, the attempt to collect more taxes through the return of toll gates, the refusal to adequately fund education, and refusal to pay minimum wage, which is an impeachable offence.

â€œDespite the countryâ€™s security challenges, it is curious that the Jonathan government has allocated a massive  lion share of the budget to security. In the first instance, the major cause of the increasing wave of insecurity in Nigeria is lack of education and mass unemployment, which are direct consequences of the general collapse of public infrastructure such as public electricity, roads, education, health etc. The security challenges are further compounded by lack of political will and abysmal ineptitude of security agencies.

â€œNo one should underestimate the general mass poverty, unemployment and discontent that has increased bottled up anger in our polity.  The removal of fuel subsidy will provide the spark for mass protests such that even the increased security vote cannot buy enough arms to contain.

â€œWe call on all Nigerian workers and people to begin preparations for a general strike and mass protests. The people must be prepared in the next few weeks when the Jonathan administration begins to implement his anti-Nigerian policy. Nigerians should prepare to occupy the streets and public institutions to prevent them from being taken over by anti-patriotic forces.

â€œThe NLC leadership will be meeting on Tuesday December 20, 2011, to firm up strategies and give directive on the commencement of   this protest and the resolve of workers and the Nigerian people to reclaim their country back.

We call on the National Assembly to side with the electorate and the Nigerian people by refusing to pass this budget. We also ask the Jonathan administration to seriously have a rethink by reviewing his budget proposal, or be ready to take on the Nigerian peopleâ€.

Zimbabwe is reportedly trying to block former Nigerian President Olusegun Obasanjo from observing the country’s July 31 election. Obasanjo, who was expected to arrive in Harare on Wednesday was said to have indefinitely postponed his arrival as the AU and the Zimbabwean government continue to discuss the matter. Obasanjo is the African Union (AU) short-term observer […]

STATESMEN are usually given state burial but former Biafran Leader, Dim Chukwuemeka Odumegwu-Ojukwu, will get more than that. His body will be flown to three African countries and one American country before the final burial in his Nnewi country home, according to his will. Anambra State Governor, Mr. Peter Obi, who gave the indication, […]

Kenya's deputy prime minister, Mr Uhuru Kenyatta, has won Kenya's presidential election by a tiny margin with 50.03 percent with a turnout of 86%, provisional results showed this morning, avoiding a run-off after a race that has divided the nation along tribal lines. Mr Kenyatta won 6,173,433 votes out of a total of 12,330,028. His […]