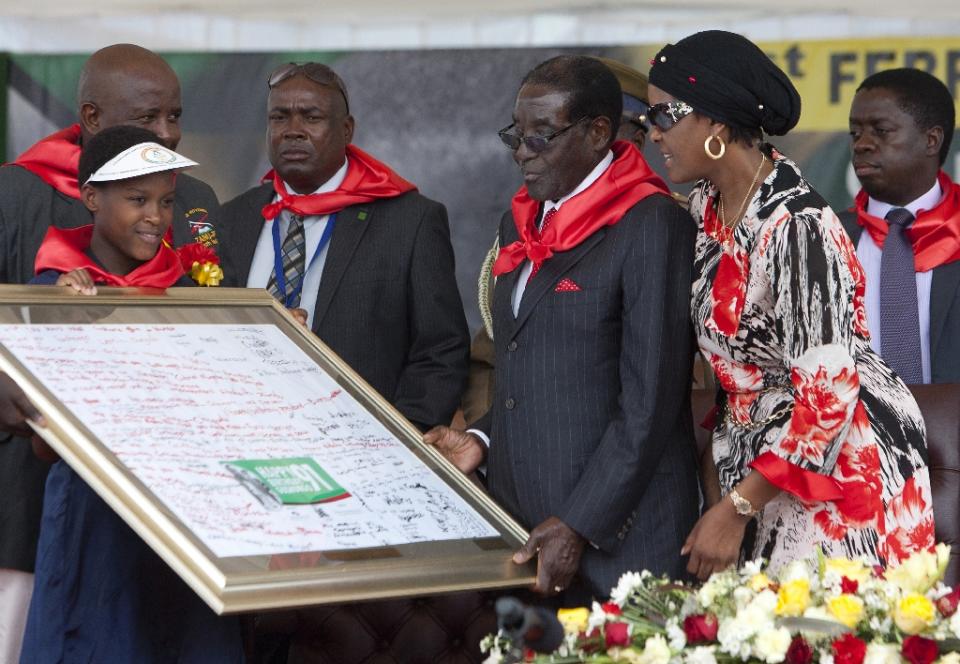 Victoria Falls (Zimbabwe) (AFP) – Zimbabwean President Robert Mugabe on Saturday celebrated his 91st birthday with a lavish million dollar bash that was slammed by the opposition as "obscene" in a country wracked by poverty. Thousands of supporters of the ruling ZANU-PF, many wearing party regalia emblazoned with the president's image, sang and danced as he arrived for the jamboree at a luxury hotel in the famed Victoria Falls resort. Assisted by his wife Grace, the elderly liberation leader, who wore a black suit, white shirt and red tie, threw 91 balloons into the air. The party, which comes a week after Mugabe's birthday, was held on the hotel golf course, with white marquees housing the guests.

Elephants were slaughtered for the feast and seven huge cakes were on display in one of the tents. One giant 91-kilo creation depicted the spectacular Victoria Falls, which empty into the Zambezi river that forms the border between Zimbabwe and Zambia. Addressing the gathering in a 90-minute speech, Mugabe castigated the US which has imposed sanctions on both Zimbabwe and him personally. "They (the US) can't have it both ways if they want to be friends then they must be friends with us in total and we allow them to have some safaris," he said. "But they can't say 'allow our people to visit, allow our people to have safaris, to kill our lions and take safari trophies to America," he added. The extravagance of Mugabe's birthday parties are a subject of annual controversy in Zimbabwe.

The opposition Movement for Democratic Change called Saturday's festivities "obscene". "All the money that has been collected to bankroll this obscene jamboree should be immediately channelled towards rehabilitating the collapsed public hospitals, clinics and rural schools in Matebeleland North province," MDC spokesman Obert Gutu said last week, referring to the province where Victoria Falls is located. Mugabe, who has ruled Zimbabwe since independence from Britain in 1980, is the world's oldest leader. One of the banners welcoming him to the party praised him as "the icon of Zimbabwe's revolution." "Forward with President Mugabe," supporters chanted. Several speakers wished him good health, with one youth leader urging the authorities to declare February 21 — his birthday — a national holiday.

While hailed by many African peers as a liberation hero, critics accuse the Zimbabwean strongman of turning southern Africa's former bread basket into a basket case by trampling human rights, democracy and the rule of law. Mugabe's violent seizure of white-owned farms triggered food shortages and hyper-inflation, while Europe and the United States imposed sanctions on Zimbabwe over elections seen as rigged. In an interview marking his birthday, Mugabe admitted he blundered by giving ill-equipped black farmers vast tracts of farmland under his controversial land reforms. "I think the farms we gave to people are too large. They can't manage them," Mugabe said. He also shrugged off questions over an incident earlier this month in which he missed a step and stumbled from a podium. "I have yet to come across to a person who has not fallen.

It was a slight fall, missing a step," Mugabe told state-controlled television. Despite his age, Mugabe appears to be in reasonable health, and according to one analyst, can regard himself as having plenty to celebrate following years of international criticism. "If his aim was to rule Zimbabwe and become the king of Zimbabwe for a long time, and whatever happened to the country he would stay there and become a continent-wide hero, I think he's achieved those aims," Dowden said. "The fact that Zimbabwe has been ruined in the process and it's now just run by thieves who call themselves ministers, looting the place continually, I don't think that worries him a bit," he added.

SHOCKING video has emerged of a man riding a motorbike with a young girl wearing only a cheap bicycle helmet clinging to his t-shirt. {youtube}ebjQ-R-fxsY{/youtube}   The video already has 8000 views on YouTube where parents have expressed disgust that a man would drive so recklessly with a small child on the back. The incident […]

“We can no longer pretend that the creation of wealth for a few will inevitably benefit the many-too often the reverse is true”- Jeremy Hobbs; Executive Director, Oxfam International LAST week, the International NGO, Oxfam International reported that: “An explosion in extreme wealth and income is exacerbating inequality and hindering the world’s ability to tackle […]

Acting President Goodluck Jonathan, last Wednesday, bowed to pressure both locally and internationally as he directed Maurice Iwu, chairman of the Independent National Electoral Commission, INEC, to proceed on a pre-disengagement leave Jonathanâ€™s directive was given in a terse statement signed by Ima Niboro, his senior special assistant on media and communication. He directed Iwu […]