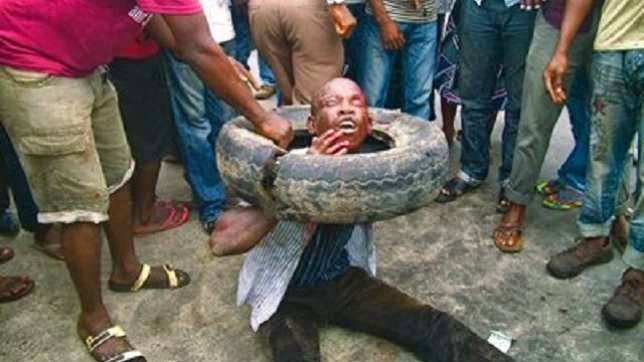 An angry mob in Petroleum down, a suburb of Dansoman area in Accra, the capital of Ghana, took jungle justice to another dimension when they apprehended a young man trying to steal a wallet and promptly set the thief on fire before the police could come to his rescue.

According to Ghana's Citi FM news, the thief was caught in the act and rather than hand him over to the police, the crowd, after beating the daylight out of him, hung a tire around his neck, poured petrol on him and set him ablaze.
An eyewitness reportedly told Citi FM reporters:

"They were actually two in number who attempted stealing from a man’s residence as he was having his bath. The man whose age I can’t tell, was lynched by the residents and lit up while the other escaped."

KINSHASA (Reuters) – Democratic Republic of Congo security forces have killed 24 people since President Joseph Kabila won a disputed presidential election, Human Rights Watch said on Thursday. The rights group said all but four of the victims were killed in the capital Kinshasa, where main opposition rival Etienne Tshisekedi is popular. It said […]

Jacob Zuma: Keeping dogs as pets ‘is not African

South Africa’s president says a dog should not be man’s best friend. President Jacob Zuma made critical remarks about pet care that touch on sensitive race relations in South Africa, which was dominated by whites until apartheid was dismantled almost two decades ago, The Star newspaper reported Thursday. The newspaper cited Zuma as saying in […]

Following a petition by a coalition of civil society groups in the country seeking accountability for the missing $12.4 oil windfall, former military president General Ibrahim Gbadamosi Babangida (rtd) has reportedly said that he â€œwas not indicted by the Okigbo Reportâ€, and that much of the funds were concentrated on infrastructural development of the Federal […]