Skip to content
There is a twist in a divorce suit between an area manager with an old generation bank in Lagos, western Nigeria, Mrs Blessing Ifeanyi-Okpoko and her estranged husband, Ifeanyi Kenneth Okpoko, as the husband alleged that Blessing fled her matrimonial home after he discovered her secret marriage to another banker, Kelvin Ugwuoke, in Dubai recently.Okpoko alleged that Blessing and Ugwuoke, who is the risk manager at a new generation bank on Lagos Island, secretly went to Dubai with a few friends and wedded before returning to Nigeria.
He lamented that while Blessing was still in his house, he received information about her wedding to Ugwuoke, and got photographs on her trip to Dubai with Ugwuoke as evidence and when he confronted her, she packed out of her matrimonial home at Ajao Estate and moved to Lekki area where Ugwuoke reportedly has a property.
Blessing also quickly filed a suit before Lagos High Court seeking for the dissolution of the marriage after the cat was let out of the bag. In the suit filed at the court, both estranged couple accused each other of adultery and want the court to dissolve the marriage which produced three female children.According to Okpoko, the 13-year old marriage crashed after his wifeâ€™s trip to Dubai.He said Blessing told him that she was going for a banking assignment in Dubai but unknown to him, her trip was to wed Ugwuoke there.
He said when she returned from the trip, he did not suspect anything until he saw the photographs of her trip with Ugwuokeand confronted Blessing who was shocked about how the information got to him.When our reporter contacted Blessing, she did not deny or confirm the allegation.She said it was not anybodyâ€™s business to tell her how she should live her life.She admitted that she knew Ugwuoke and declined to comment on whether she is staying in Ugwuokeâ€™s house in Lekki as claimed by Okpoko.
When Ugwuoke was also contacted at his office, our reporter was asked to leave the bank premises by security guards who said Ugwuoke was not ready to entertain such matter as it was not part of his schedule in the bank.P.M.NEWS learnt that Ugwuoke, who is from Nsukka in Enugu State, met Blessing at the Kano branch of the old 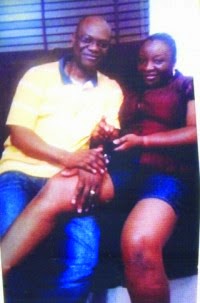 generation bank where they both worked before left to join a new generation bank.
They allegedly became lovers for years before Blessing married Okpoko, who is a furniture dealer in Lagos.
Blessing later met Ugwuoke who had separated from his wife in Lagos and the relationship allegedly continued until it allegedly culminated in the Dubai wedding.
In the suit number ID/477WD/13 filed before the court, Blessing alleged that the respondent (Okpoko) had committed adultery with many women whom he had brought to their matrimonial home to sleep with in the presence of their three young female children. She alleged that the respondent sought to use physical violence and even threatened to kill her in order to inherit all her property solely purchased by her.She also alleged that the respondent has subjected her and the female children to mental, physical and emotional trauma by accusing her that she cannot bear male children.
In response, Okpoko denied all the allegations and stated that Blessing has made him a very miserable man by constantly reminding him of his educational background, that he was a secondary school drop-out.He stated that Blessing intimidated and made jest of him by telling him that she married him out of pity and reminded him that they were not in the same class.
He alleged that Blessing was a dishonest and serial liar who brought home strange men and constantly slept outside her matrimonial home under the pretence of doing her job, thereby neglecting her duties in her matrimonial home. No date has been fixed for the hearing.

Stars optimistic ahead of Nigeria game

Harambee Stars Norway-based goalkeeper Arnold Origi is expected to ensure that some of the goalkeeping blunders by Noah Ayuko during the Kenya-Tunisia march earlier this year which cost Kenya all three points are not repeated when they face host Nigeria Sunday in the 2010 World Cup qualifier match in Abuja.

A four-day siege at a gas facility in the Sahara desert has ended, with militants and some hostages killed. Seven hostages were killed by their captors during a final raid by Algerian troops – at least 23 hostages and 32 hostage-takers died in the four-day stand-off, Algerian officials say. Five Britons are feared dead or […]

The new face of Asaba

A first-time visitor to Asaba, the Delta State capital, especially at night, and at a time most statesâ€™ capitals in the country experience unending power outage,