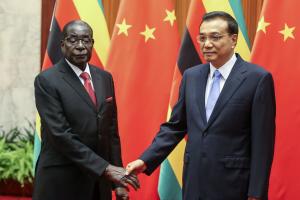 HARARE (Reuters) – Foreign investment into Zimbabwe plunged 59 percent to $67 million in the first half of this year, the central bank said on Monday, reflecting worries over President Robert Mugabe's policies and the risk of investing in his country.

Mugabe, at 90 Africa's oldest leader and one of its longest-serving, is visiting China this week. Officials say he will seek funds to rebuild decaying roads, rail and power facilities and to help mechanise Zimbabwe's agriculture.

Official data show China has extended $1 billion in loans to Zimbabwe since 2009 and trade between the two nations rose to $1 billion last year from $300 million five years ago.

Mugabe has increasingly leaned on China after being shunned by Western trade and financial partners. They have been put off by concern over human rights and alleged fraud in elections won by the president and his ZANU-PF party.

Announcing the drop in foreign direct investment, Reserve Bank of Zimbabwe governor John Mangudya said exports, mostly minerals and tobacco, were also down 13 percent in the first half of the year, to $1.3 billion, compared with the first six months of 2013.

"There is therefore need for the country to create an investor-friendly environment so as to tap into these external capital resources to boost employment, production and exports," Mangudya said in a half-year monetary policy statement. Zimbabwe's economy is experiencing a serious dollar crunch and electricity shortages. Several companies have failed to pay salaries or have closed altogether, in a country where only 500,000 out of a total 13 million people hold formal jobs.

The economy did return to growth in 2009, after nearly a decade of recession, when Mugabe was forced to share power with his opposition rivals. But his landslide victory last year has coincided with a rapid slowdown.

The government has cut its growth target for this year to 3.1 percent from 6.1 percent previously. Mangudya said the tough economic conditions had strained the capacity of companies and individuals to repay loans. The percentage of non-performing loans out of total loans had risen to 18.5 percent from 17 percent at the start of the year. Banks in turn have tightened their lending to customers. "Reduced credit is leading to a decline in economic growth, private consumption, job losses and decrease in government revenue," Mangudya said. Mangudya said liquidity problems among banks meant foreign banks like units of Barclays Bank plc and Standard Chartered and larger local lenders would have to raise their minimum capital to $100 million by 2020 from the current $25 million. Smaller banks would be required to maintain minimum capital of $25 million. Mangudya said in order to ease the dollar crunch in the economy, banks would now be required to keep only five percent of their foreign currency offshore, down from 30 percent.

Mandela spends fourth day in hospital with ‘no significant change’

Nelson Mandela spent part of Monday with his family at his hospital bedside, the South African government said, adding that there was no significant change in the condition of the frail anti-apartheid hero. The 94-year-old former president and Nobel peace laureate has been in hospital since late Wednesday being treated for a recurrent bout of […]

ABUJA â€” RELIABLE sources in Saudi Arabia, yesterday, told Vanguard that the President, Alhaji Umaru Yarâ€™Adua was in stable condition, even as the Senate President, ChiefÂ  David Mark, called on Nigerians to pray for nine consecutive days for the quick recovery of the President.

South Africa: Taxi driver handcuffed to back of police van and dragged to his death