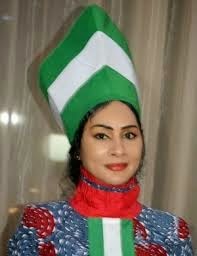 The Director General of the Nigeria Tourism Development Commission (NTDC) Mrs. Sally Uwechue-Mbanefo may be doing everything possible to cover up an alleged fraud in her participation in the ongoing Brazil 2014 World Cup after a failed attempt to chew up a piece of incriminating document in a Brazilian hotel June 18. She has asked for a meeting with President Goodluck Jonathan to explain her role in the alleged fraud that is threatening her credibility,.
Mbanefo was alleged to have diverted an undisclosed amount of money meant for the sponsorship of a proposed Nigerian Fan’s village in Brazil, after which she asked for the Memorandum of Understanding (MoU) between her and Za Entertainment, the contractor for the project; tore it and began to chew the paper. Her attempt to chew and swallow the MoU led to a physical altercation between her and President of Za Entertainment, Mr. Azania Omo-Agege who held her tightly forcing the papers out of her mouth.
He said: “Two weeks to the tournament, we had an MoU that includes how much we were going to be paid and I went around seeking for funds for the project.
“From information available to me, about four banks may have paid money to her and we have not seen anything and the failure of the fan’s village project should be blamed on the NTDC.
“We did everything possible to help them but unfortunately it has ended the way it did
“The brochure provided that all payments be made to either our own account or Omo-Agege’s account but that was not done. I also understand that some banks gave them money and the people at the NTDC should be able to account for that.”
When The Nigerian Times called to speak with the NTDC boss, her aide promised that she would call back as she was in a meeting, but instead her lawyer who identified himself as Barrister Mark Ibrahim called to say he had been asked to speak on her behalf.
He said: “The NTDC entered into an agreement with one Mr. Azania Omo-Agege the President of Za entertainment and the agreement provides that Omo-Agege who is the initiator shall source the funds and drive same and shall also construct the village and maintain same for the entire duration of the world cup.
“Her contention is that these two things were not done by them; there was no village built as contracted, instead of that, Omo-agege was now asking for more money after he had already been given $10,000 before leaving Nigeria.
“He was not ready to fulfill his own part of the agreement but the DG had to use one of the rooms in the hotel in which she stayed as a mini fan’s village in order not to disappoint Nigerians.
“According to her the man was supposed to raise funds for all that but refused to do so.”

The lawyer denied any altercation between the DG and the contractor claiming her kind of person would not do such. He however accused Omo-Agege of threatening his client in Brazil.'

This is unedited text of President Goodluck Jonathan’s speech during the premiere of the movie ‘The Meeting’ last Friday October 19, 2012 at the Oriental Hotel in Lagos. The remarks of His Excellency, President Jonathan at the premiere, as delivered by the Nigerian Minister of Petroleum Resources, Mrs Diezani Alison-Madueke.   REMARKS BY HIS EXCELLENCY, […]

Sierra Leone launched a door-to-door search Wednesday for “hidden” Ebola patients as the head of the United Nations announced the world was at “a critical turning point” in the crisis. Dozens of healthcare workers fanned out across remote parts of Port Loko district, east of the capital Freetown, after a spike in cases attributed to […]

Once known for its billion-dollar notes and hyper-inflation, Zimbabwe must be the only place in the world to have eight currencies as legal tender – none of them its own. For the last five years, most people have been using US dollars or South African rand, but pula from Botswana and British pound sterling have […]